Bruno is sad remembering the good times. He used to have friends, but now he is alone. Bruno is 3 years old, almost 6ft. tall, and weighs about 1,000 lbs. His antlers span almost 6 ft. He is an Alaskan Moose. His name means "brown shining armor." 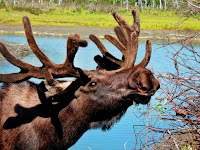 As a youngster, Bruno was a happy living with his mom. His kind and loving mom had many friends. Moose don’t hang around with each other as a group.  Normally, only a cow mom and her baby live and hang out together. His mom was the exception. She had friends who loved to hang out with her. They didn’t do it all together, but one cow at a time and her baby were always near. The cows would take turns coming by to spend time with Bruno’s mom. This way, Bruno always had another baby moose to play with. 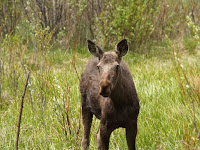 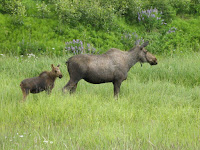 His friends included: Petey meaning "stone" and pronounced PEE-tee, Kieron or "little dark one" pronounced KEER-an, Emmi pronounced EM-ee meaning "rival," and Hilda pronounced HIl-duh meaning "battle, war."
Bruno got along well with the young cows and bulls. They played tag, ran around, and splashed in the river and beaver ponds. Petey and Bruno were best friends and tried to spend more time together.

Bruno started growing faster than the others. Soon, he was noticeably taller and putting on muscle. He didn’t look like a baby anymore and things started to change between the young moose.

Hilda liked Emmi her female friend. She didn't pay much attention to Petey. Hilda didn’t like Bruno, but thought the world of Kieron, her favorite. Every time she came around Bruno she talked about Kieron being fast and strong. Hilda didn’t like it that Bruno grew larger and stronger than Kieron. She wanted to do something that would make Kieron look better and Bruno look bad to the other moose.

One day, Kieron played with Bruno and noticed Bruno's antlers had sprouted. He said, “Bruno you have antlers growing.”

“Come over to the pond and I will show you.” Kieron turned and walked toward the pond. Bruno followed. Looking down in the water he saw his reflection. Sure enough, a small nub grew out of his head on one side and another smaller one on the other. Bruno thought this was cool until he saw the expression on Kieron’s face.

“I’m sure yours will start soon and will be larger.” reassured Bruno.

Kieron lifted his head in the air and trotted over to his mom and nudged her that they should go. Soon she obliged, and off they went home. Excited Bruno raced to tell his mom and didn’t notice the look he got from Kieron as he left.

Bruno’s mom was thrilled for him. She said, “My little bull is growing up and will soon be out on his own conquering his world.”


Bruno smiled as good as a moose can smile and laid his head against his mom’s side, glad to be growing up but not sure he wanted to be out on his own.
The next time he saw Hilda, she seemed strangely distant. She didn’t want to play or go exploring like she used to. It was the same with Emmi who came the next day. When Petey came, he acted the same as always and glad for Bruno, asking all sorts of questions like: "Did you feel them come up? Do they itch? Do you know when they will stop growing for the season? Do you know how large they will be?"


One day all the moms got together for Bruno’s mom’s birthday. They brought their young to play together. They had never been all together before and Bruno was thrilled. He bounded up to them like an excited puppy. He stopped short of colliding with Petey. Hilda looked at Bruno then the others. She nudged Emmi and said, “See I told you.” Emmi looked at Bruno standing between Kieron and Petey.
"You’re right.” she said.


“Right about what?” inquired Bruno.
“Nothing.” said Hilda quickly before Emmi could respond.


An uncomfortable silence came upon the group. Bruno asked, “What do you guys want to do today?”
Petey said, “I don’t know.”


Emmi said, “Why don’t you bulls have a race in the meadow?” The bulls looked at each other.
Petey said, “Why not. It may be fun.”


At the meadow, Hilda gave the rules, “Start here, run around the clump of trees and back.”
The race began. A blur of dark bodies ran around the tree and back. Bruno took the lead. His longer legs had the advantage.

Bruno had never done anything like that before and it felt great! Petey was happy for his friend and Kieron joined in the excitement of the moment. The boys walked over to the stream for a drink.


Hilda and Emmi were disappointed. When they had come up with this plan they thought Bruno would trip over his long legs and come crashing down. They wanted him to fail.
Hilda and Emmi followed the bulls to the stream. Hilda said, “Bruno you look funny when you run. Those legs of yours look odd.”


Emmi chimed in, “Kieron and Petey run smooth not disjointed and jerky like you do.”
Hilda said, “I noticed how you hold your head. I think your head is too big. When your antlers come in you will fall over. Your hooves are too small to hold yourself up well. I bet your hooves and ankles hurt. Or they should.” She stared at his hooves.


Kieron eyed Bruno then said, “I hadn’t noticed before, but your tail looks like a wolf’s tail. You look might funny Bruno.” The three laughed.

Petey stood there looking back and forth.

Bruno blinked at them, lowered his head, and walked away. Their laughter followed him as he went to stand by his mom.
After the cows and their young went home, Bruno told his mom what happened. She said, “Honey, you are bigger than they are but you are all in proportion.  You're going to be a fine looking bull. They are probably jealous of your abilities and how fast you are growing.”


The next day, Emmi’s mom kept calling Emmi to hurry up. She said, “I don’t know what has gotten into that cow. I think she has lead in her hooves.” Emmi stayed back and would not come close to Bruno. She pretended she was grazing on a wonderful plant and couldn’t come over. Bruno knew she didn’t want to be around a freak. He walked off in the other direction. He was tired because all night he kept playing the scene from yesterday in his head over and over. Even now, he heard their laughter ringin inside his head.
He went to the beaver pond and ploped down in the grass near the water. Bruno overheard, “There is the strange looking moose I was telling you about. Don’t get near him; you may catch what he has.” He swivled his head and saw Hilda talking to another moose he didn’t know. Laughing they went away.

This kind of stuff went on every time he was around young moose. Every day, Bruno grew taller and stronger and his antlers came in nicely. A sadness had overtaken him because didn’t have any friends.

Moose cows send their young away at about a year old. That is typically the time the first buds of antlers appear on the bulls. Bruno was only nine months old, but he looked to be over a year old. The other moms told his mom she needed to send him out on his own. Bruno’s mom said, “Not until his appointed time. He still has a few months with me. I’m not ready to send him off. I want to keep him until he is also ready.” 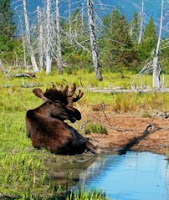 Those few months were good and bad for Bruno. Good, because he was with his loving mom and he felt cared for. Bad, because he got teased by everyone and felt rejected by them all except for his mom.

Too soon the time  came for him to go off on his own and make a new life. His mom encouraged him. "You are big and strong and bale to take good care of yourself"

Bruno with head down walked away deep into the forest. Now, he was alone. No friends or family.


What do you think about this story of Bruno? Have you seen someone teased and made fun of? How do you think that person felt? I’m sure they felt sad and lonely. I am disappointed in Hilda, Emmi, and Kieron. They treated Bruno badly. They were wrong in what they did. I’m also disappointed in Petey who didn’t stand up for his friend. He just stood by and watched. That is almost as bad. Kieron, Emmi, and Hilda were mean in what they said and did. Petey was mean in not doing anything. What would you have done? How do you treat others?
Are you the one who has been treated badly? Have you been hurt by others? Do you understand what Bruno went through? People can be mean, especially children. Sometimes they act like your friend then they turn against you. I remember those times. We need to be kind even when someone is mean to us. Remember, we need to forgive those who hurt us. We need to remember our parents and family love us. We are loved by the Lord. He loves us more than any person can.


The Bible says: Deuteronomy 31:6 Be strong and of good courage, do not fear nor be afraid of them; for the Lord your God, He is the One who goes with you. He will not leave you nor forsake you. 1 Peter 5:7 casting all your care upon Him, for He cares for you. Isaiah 41:10 Fear not, for I am with you; be not dismayed, for I am your God. I will strengthen you, Yes, I will help you, I will uphold you with My righteous right hand.
God also talks to us about being kind to others. Kindness is one of the fruits of the Spirit. You can find that list in Galatians 5:22-23. Ephesians 4:32 And be kind to one another, tenderhearted, forgiving one another, even as God in Christ forgave you.

Memorize: Isaiah 41:10 Fear not, for I am with you; be not dismayed, for I am your God. I will strengthen you, Yes, I will help you, I will uphold you with My righteous right hand. Or : Deuteronomy 31:6 Be strong and of good courage, do not fear nor be afraid of them; for the Lord your God, He is the One who goes with you. He will not leave you nor forsake you.