Horace is a caterpillar. He recently hatched. He is thriving on the leaves he is eating. His mom laid his egg along with others on these wonderful leaves, and he loves them. They taste so good and are making him grow big.


Caterpillars are very small when they first hatch. The first thing they do is eat the leaf their egg was on. His job is to grow big and fat and then make a chrysalis which is like a cocoon, only it's hard. Inside the chrysalis, he will transform into a butterfly. Some caterpillars, like the one in this picture, will spin a cocoon and turn into a moth: 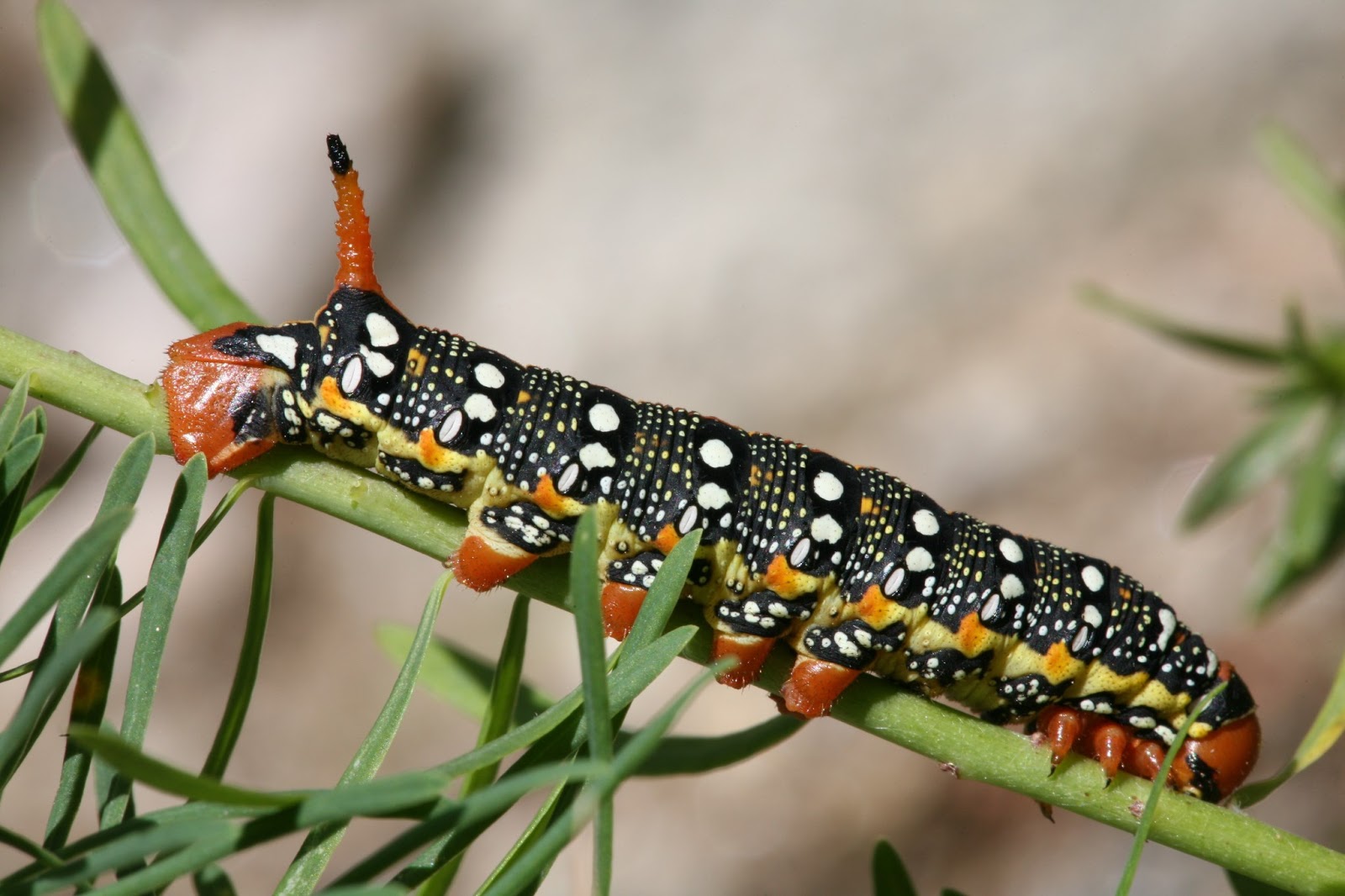 Horace was just told what he needed to do by one of his siblings. He thought he was always going to stay this way. He likes being big and fat. Horace likes to climb around on leaves and plants. He enjoys moving slowly and eating all day. Now, Horace is afraid. He doesn’t know what it will be like in his new body. He doesn’t want to change. He likes it the way it is. This is a problem for Horace. 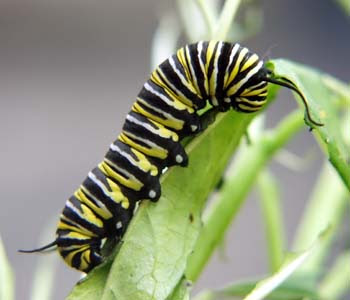 Horace watched a cousin hang upside down and make a chrysalis over his body. His cousin disappeared, completely covered in the sack. He knows that it's what he is supposed to do, but he is afraid. He becomes so afraid he stops eating. He figures if he is not big and fat he won’t have to make a chrysalis and change. 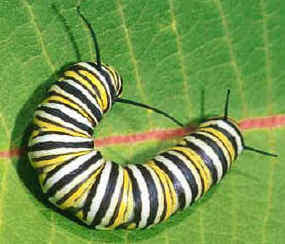 The problem with his plan is he is hungry. He smells the leaves and they seem to call his name. Horace, Horace, eat me. You love my juicy goodness. Horace shakes his head and tries to think about something else.


Above his head he sees something flutter by. “What is that beautiful creature?” He asked his sister.


“That, my dear Horace, is our cousin Carrie. Isn’t she beautiful?” Teresa said.


“How can that be? She was inching her way up a stem to some great looking leaves last time I her. What happened to her?” questioned Horace.


Teresa answered, “She did what all caterpillars do. She made herself a chrysalis and changed into a beautiful butterfly. She broke out and learned to fly. Doesn’t she look happy?” 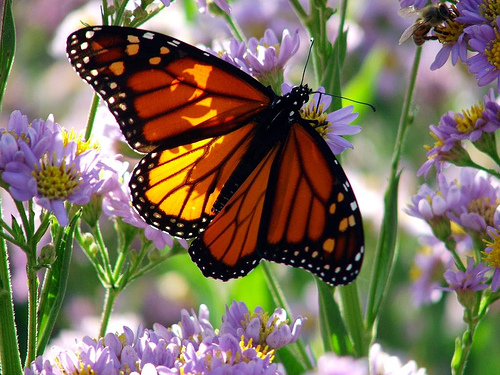 Horace frowned as he watched his cousin, now a butterfly, fly out of sight. He wasn’t sure he liked the whole idea. His sister said she was getting ready for her adventure soon. He didn’t like that either but just said, “Suit yourself.”


Soon, all the caterpillars were either making, were in, or were just coming out of their chrysalis. This made Horace nervous. He was not sure he could stop it from happening. All he knew for sure was he was starving. He couldn’t go on any longer. He took a huge bite of the leaf he was on and couldn’t stop. He ate all the tender part and left the large vein that he was standing on. He worked his way little by little to another leaf and ate that too. He felt much better, but he was still afraid. 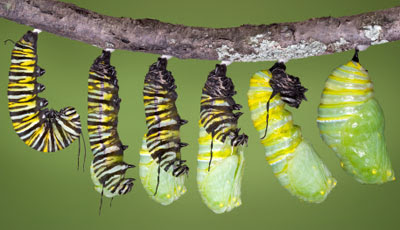 A butterfly landed next to him, scaring him.  He jumped, almost falling off the leaf. The butterfly said, “Horus, it’s me, Teresa. I feel wonderful! I like my new body! I can go anywhere and get there fast! Watch!”

Off she flew in a fluttery way. He had to admit she was beautiful. He liked her beautiful bright orange and gold wings. Her body was so different. It didn’t resemble her old self at all! Right then he decided he would put his worries away and get down to business. He looked for a good place to make his chrysalis. 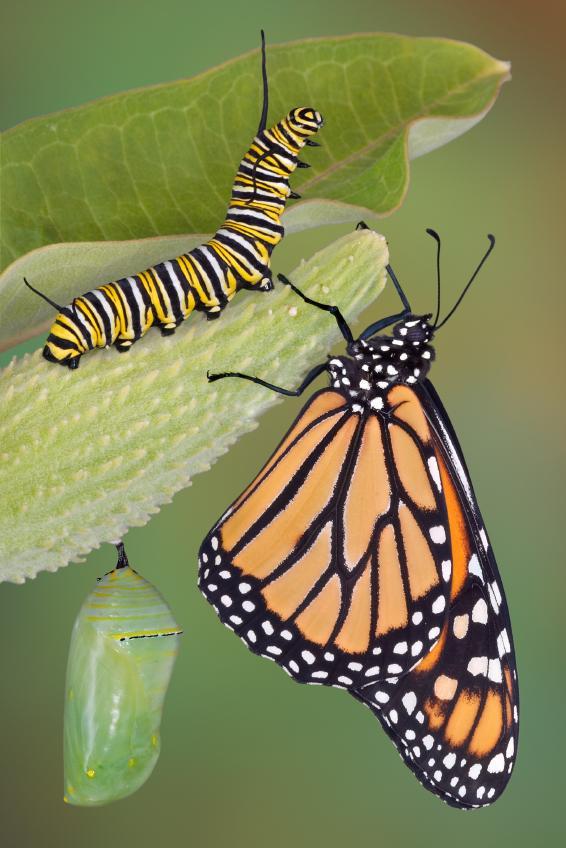 Horace found a good place and started on his chrysalis. Soon he was encapsulated in the sack. After a while he struggled and struggled, finally breaking free of the thing. His body knew what to do and blood began to flow into his wings giving them strength. He tried them out and was relieved he could use them. Slowly at first, he began a low flutter around, and then he got brave and flew off into the air. He was excited. He loved his new body! He realized he hadn’t needed to be afraid. He didn’t remember anything after he made the chrysalis until he was trying to get out. 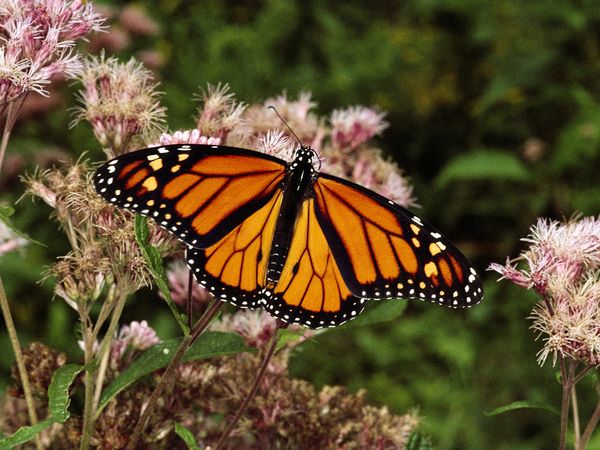 Boys and girls, the process Horace went through is called metamorphosis: from egg, to caterpillar, to chrysalis, to butterfly. Some caterpillars turn into butterflies and some into moths. Salvation is like metamorphosis. Before we ask Jesus to be our Savior, we have an old nature. When we trust Jesus to be our Savior we change completely into a new nature. We are no longer dead but alive, transformed. We are one with Christ. Our sin has been forgiven. To learn more about Salvation, go to the lesson called Salvation


The Bible talks about our new man in many places. Two of those places are: 2 Corinthians 5:17 Therefore, if anyone is in Christ, he is a new creation; old things are passed away; behold, all things have become new. Colossians 3:10 and have put on the new man who is renewed in knowledge according to the image if Him who created him.


Memorize: 2 Corinthians 5:17 Therefore, if anyone is in Christ, he is a new creation; old things are passed away; behold, all things have become new.


Email ThisBlogThis!Share to TwitterShare to FacebookShare to Pinterest
Labels: Metamorphosis