We all have choices to make in our lives. Some choices are easy, like picking what flavor of ice cream we want to eat or what to wear that day. Some choices are more difficult: Do I need to obey right now? Would it be nice if I sit next to this person who doesn’t have many friends? Should I do my chore completely or just part of it and call it good? Tell a lie? Be mean to someone or animal? How about if take something that does not belong to me?


Choices are all around us every day. We need to be wise in our choices. King David had choices to make. This lesson will have three of those choices.


The Lord is in control over all the world and universe. He didn’t make us puppets, to do only what He said, but He made us with a free will. Choices are ours to make. Choices have consequences both good and bad.


The Lord allows Satan to tempt us. In this way, our faith can grow as well as our reliance on the Lord. Satan wanted to bring harm to Israel and the Lord allowed it. Satan temped David to sin against the Lord. He played upon David’s pride and put a thought into his head. This thought was to count the mighty warriors David had in his kingdom.


Years earlier, when the Israelites were to enter the Promised Land, God had them count the people. This is called a census and was used to prepare Israel to conquer the Land.


The Lord was angry with David. Gad, the Lord’s prophet, came with the word of the Lord to David. Gad told David that he had three choices of punishment: a famine for three years, three months of attack from his enemies, or plague throughout the land with the angel of the Lord ravaging every part of Israel.


David saw what he had done wrong and repented. He chose to be punished with the hand of the Lord rather than the hand of men. He said, “The Lord’s mercy is very great.”


The Lord sent one of his angels to slay the people with a terrible plague. This plague, killed seventy thousand men. When the Lord saw the angel about to destroy Jerusalem, he said, “Stop! That is enough!” 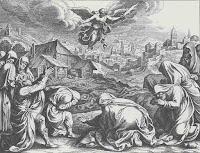 David looked up and saw an angel of the Lord standing in the sky with a sword. David and the elders clothed in sackcloth fell face to the ground. David said to the Lord, “I am the one who called for the census! I am the one who has sinned and done wrong! But these people are innocent as sheep—what have they done? O Lord my God, let your anger fall against me and my family, but do not destroy your people.” (1Chronicles 21:17 NLT)

The angel of the Lord told Gad to tell David to build an altar. David was standing on another man’s property. This is where he wanted to build the altar and asked the owner, “Let me buy this threshing floor from you at full price. Then I will build an altar to the Lord there, so that He will stop the plague.” (1Chronicles 21: 22 NLT)


The man said that David could take the land and he would also give him oxen to use for the sacrifice. David said, “No, I must insist on buying it for the full price. I will not take what is yours and give it to the Lord. I will not present burnt offering that have cost me nothing!” (1Chronicles 21:24 NLT)


David paid 600 pieces of gold for the threshing floor. David made an altar and sacrificed burnt offerings and peace offerings. David prayed and the Lord sent fire down from heaven to consume the offering. Then the Lord spoke to the angel, who put his sword back into its sheath.

When David saw the Lord answered his prayer, he sacrificed unto the Lord again with a thankful heart.


David had choices that were hard to make. The first was whether or not to listen to Satan and his own pride. This was a bad choice. He shouldn’t have listened to Satan and he should have ask the Lord if he should do this or not. The Lord probably would have told him he didn’t need to know how many men he had.


The next decision was how he wanted his punishment. He chose to have the Lord deal with him instead of man. I think this was a wise choice. The Lord was merciful and stopped the angel before more people died.


The last choice we looked at is deciding if he should pay for the land where he wanted to make a sacrifice. He may have chosen to take the offer from the owner, and take it as a gift. That would have been easiest. But, David chose the hard way. He wanted it to cost him something. This was a great choice.


Everyone has choices, even a great biblical king like David had choices. Some of his choices we looked at were good choices some unfortunately were not. David repented and learned from his mistakes. All choices have consequences, good or bad.


We need to think before we make our choices. We should ask the Lord if this is what He would want us to do. The answer may be yes, or it may be no. If you have trusted the Lord Jesus as your Savior, He gave you the Holy Spirit. The Holy Spirit will then let you know if it is the right thing to do. You and I have a free will to do what we want, but remember, there are consequences to whatever we do.


Memorize:  Proverbs 3: 5-6 Trust the Lord with all your heart, and lean not unto your own understanding; (6) In all your ways acknowledge Him and He shall direct your path.


Verses in NKJV unless otherwise stated
Email ThisBlogThis!Share to TwitterShare to FacebookShare to Pinterest
Labels: The Life of David