Ande is a gazelle in his teens living in Africa. He’s at that awkward age where his legs don’t always obey his brain. He trips often. Dumi, his good friend, is not so clumsy. In fact, Dumi is graceful like gazelle’s are known to be.


Ande doesn’t want to trip, who would? One day he’ll grow out of his ungracefulness. Right now though, he’s clumsy and awkward. In a large herd of gazelles, when they run, sometimes he accidently falls into one or more.


A few days ago, Ande and Dumi were grazing and talking. They belong in the bachelor herd along with about fifty others. Kimoni, the eldest in the herd, skidded up and yelled, “A Cheetah is on the prowl, take flight!”


Immediately, there was pandemonium, which means chaos or unrestrained disorder. The gazelles ran every which way all at the same time. There were collisions and confusion. Dumi ran to his left as Ande ran to his right causing them to collide. Ande said, “Sorry.” as he moved to his left. Untangled, they ran. 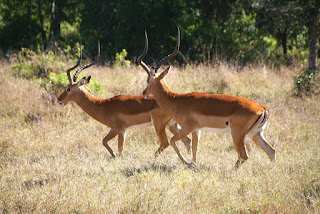 The herd was one, flying through the Savanna. When they were almost at the end of their endurance they came to a halt. Panting, they looked back with frightened eyes. It looked as though they had out run the fastest animal alive. They relaxed and grazed.


A twig snapped. In that direction the grass moved. It must be the cheetah! More frightened this time they scattered. Ande fell against Dumi. He got back on his feet and took two leaps and tripped into Dumi again. “I’m sorry.” he said.


“You need to stop doing that!” said Dumi.


On they ran. Again Ande tripped, this time taking Dumi down in the fall. Dumi thought the cheetah had him. He struggled to free himself. When the two were upright, Dumi saw it was Ande. He got angry. “You have knocked into me for the last time! Stay away from me!” Dumi didn’t wait for Ande’s reply. He took off like a flash.


Ande was shocked. Dumi had never spoken to him like that before. He didn’t have time to dwell on it because he needed to get out of the cheetah’s sights. Off he went after the herd.


Finally, the herd stopped and Ande made his way up to his friend. “I’m sorry, Dumi. I didn’t mean to fall on you. Are you all right?”


“I told you to stay away from me! You almost got us killed!”


“But Dumi…” Ande didn’t finish because Dumi leaped away.


Ande stood there watching his best friend leave. Sadness filled his heart. He didn’t know what to do. He longed for his friend to understand. Looking around, he discovered he was all alone. Loneliness crowded into his sad heart. He fell to the ground and put his head on his front legs. What was he going to do? Dumi had always been so understanding and kind.


From a distance, Kimoni saw the exchange between Ande and Dumi. Kimoni followed Dumi. “Dumi, what did you say to Ande?” asked Kimoni.


“Why did you do that? I thought you two were friends.”


Dumi said, “We were. He tripped and made us fall. I thought the cheetah had me. I thought I was going to be killed! I don’t want Ande around anymore.”


“Oh, I understand. Did you see the cheetah?”


“So you were not in any real danger. The cheetah ran out of steam long ago. We were well ahead of him. Do you think Ande did that on purpose? Did he want to harm you? What do you think Ande would have done had the cheetah been close to attacking you?”


“From watching him all of his life, I believe he would have stepped between you and the cheetah and taken the hit. Ande loves you like a brother. He would never want harm to come to you. Ande is all alone right now.” Kimoni finished speaking leaving Dumi alone with his thoughts.


Dumi had a rough night. He couldn’t get what Kimoni said out of his mind. He knew in his heart, Ande didn’t trip on purpose. He knew he should forgive him and patch it up. He stewed on it all the next day.


Ande hadn’t seen Dumi since he stormed off and realized Dumi had meant what he said. He felt sad thinking he didn’t have a friend in the world. Ande left the herd. He walked for miles. He didn’t have a plan where he was going and he didn’t care. 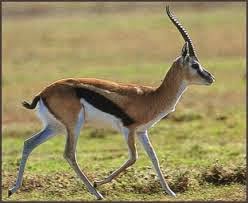 All of a sudden he heard hooves behind him. He stopped and turned as he was flattened to the ground and pinned. “Where do you think you are going?”


“Well buddy, you’ll have to change your mind and come back. I miss you and the grass is calling, waiting for you to consume a ton.” said Dumi.


Ande said, “But I thought you said for me to stay away from you.”


“I did but I shouldn’t have. You didn’t knock me over on purpose. I thought the cheetah had me. I’m sorry I yelled at you.”


“Dumi, I forgive you. Are we still friends?”


“Of course! We will always be best buds.” said Dumi.


“I’m sorry I knocked you over and frightened you.”


“I know and I should have forgiven you right then.”


Together they walked back to the herd, occasionally chasing a butterfly. Ande knocked into Dumi playfull and on purpose this time. They both broke out in an explosive laugh.


Kimoni watched them approach and swelled with pride knowing Dumi did the right thing.


Boys and girls, how well do you forgive others? Do you do it right away? People will hurt you. Most will not do it on purpose, but it will happen. Forgiveness is the best medicine for you to feel better even if they don’t ask for forgiveness. When someone hurts us, our job is to forgive. The Lord wants us to forgive others and to say we are sorry when we hurt someone.


Memorize one or both of these verses: Matthew 6:14: For if we forgive men their trespasses, your heavenly Father will forgive you. Colossians 3:13a: bearing with one another, and forgiving one another…


Email ThisBlogThis!Share to TwitterShare to FacebookShare to Pinterest
Labels: Forgiveness