Getting Along With Others 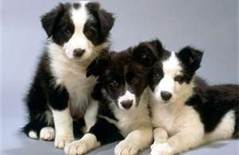 Puppies...I love puppies. They are so soft, cuddly, and cute. I bet you are smiling right now just thinking of one. This particular puppy lives in a family of one mother and six brothers and sisters. They were just adorable when they were born. Their little eyes were not open and their little voices squeaked.  They tried to walk on shaky legs. They slept most of the time. They would eat and go right to sleep again.

Soon they grew a little bit and were climbing all over their mother looking for food. They would bite and play, rolling all over the floor and growling at each other. The seven puppies played hard until they got tired and curled up to sleep, forming a large soft ball of fur. Then, mommy could also rest. Sighing, she would lay down next to them for a nap until they were hungry again. 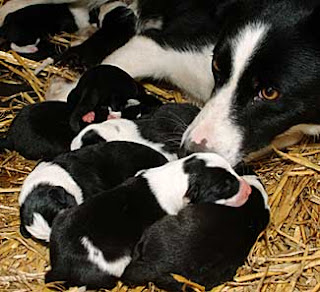 They lived on a farm with other animals. There were pigs, horses, cows, and cats. It seemed to the puppies that there were hundreds of cats. Dogs don’t naturally like cats. They normally like to chase them and eat them. Yuck! I wouldn’t want to eat a cat, would you? The fur would get stuck in your teeth!

The pups were told by their mother to stay away from the cats. The cats knew this and would antagonize them. That means they would tease them and get as close as they could and try to get the puppies to chase them. The puppies wanted to chase them so desperately! Sometimes one could not hold himself back and would take off after a cat. Being a little pup, he wouldn't get very far. One of the other, bigger cats would jump out at the pup and bat it away. The puppy would go crashing into a bale of hay or the side of the barn. Then, the whining puppy would go find his mommy, and she would lick away the tears and hug him tight.

As the puppies grew, they got stronger and faster. Once, one of the puppies almost caught one of the cats! This became a game, but they knew they would be in terrible trouble if they hurt one of the cats. The farm animals knew they needed to be just like a large family. Even though they were different, they all needed to get along with each other. The horses, pigs, cows, cats, and dogs knew they needed each other. Their owner would not put up with such shenanigans. So, for the most part, they got along. Each animal had a job, and they helped the other animals. The dogs helped the owner move the cows where they needed to go, and they alerted everyone by barking if there was danger. The cats killed the rats and mice so they would not eat the other animal’s food or get into the owners house. The horses let all the other animals know when a storm was coming because they sensed it first. They also would pull wagons or take the owner for a fast run over the meadow. The cows were milked for milk and cheese and gave their extra milk to the cats and puppies. The pigs...well...the pigs ate what all the other animals wouldn’t eat, getting fatter and fatter. They all got along and worked together because they loved the owner they worked for.

One of the puppies was named Spot. He got his name because he was all black except for a large white spot on his chest, right between his front legs. The white spot stood out against his dark black fur. Spot didn’t get along with others. He just didn’t get it. He was always being a pest. He was always bothering his siblings. He would walk by another puppy and would bump into him or her and knock them down. He would shove and bite to be first to eat. If one of the puppies was talking to their mommy, he would interrupt. One time, his mommy was talking to one of the horses, and he tapped and tapped and tapped on her side with his paw trying to get her attention. This annoyed her because he was interrupting her. He had to sleep by himself that night because he did that. This didn’t stop him, though. He was always trying to be annoying or interrupting. He would see some of his siblings playing, and he would push his way into the middle of the game, demanding it was his turn. Spot was bothersome. He just didn’t see that he needed to get along. Sometimes, when his siblings were playing a guessing game, he would hum loudly just to annoy them. His mommy would tell him to be kind, take his turn, wait, be nice, sit still, not pick on his brother, and many other things. I’m sure you can imagine what she would say.

His mommy found him sitting all alone by the big oak tree. His mommy said, “Spot, why are you here by yourself? What is wrong?”

Spot replied, as a tear slid down his cheek, “No one likes me.”

Mommy said, “Why do you think they don’t like you?”

Spot said, “They will not play with me. When I come near, they scatter and hide from me. The pig just tried to squish me!”

“Do you think there might be a reason why they treat you this way?” asked Mommy.

Shaking his head he said, “No.”

Mommy asked, “Spot, remember all the times you have been in trouble? What were they for?”

Mommy said, “I think you do. They were for when you were being unkind. You were bothering your brother, interrupting, shoving, or punching, among other things. You have not gotten along with others, and look where it has gotten you.”

Spot put his head down on his front legs and started to cry in earnest. Sobbing, he said, “What can I do? What shall become of me?” Then out of anger, he said, “Maybe I’ll run away!”

Mommy said, “You could run away, but that will not help your problem. If you do not change your attitude and start to show love to others, you will never have any friends. Think about that. When you decide to change your attitude, come and tell me.” Mommy walked away to find all of her other pups.

Spot sat there thinking about what his mommy had said. He thought about how mean and inconsiderate he had been. He remembered the time when one of his brothers was asleep and he pulled his tail just to be mean. He remembered how many times he had been a pest and had been mean to others. Still crying, he decided to change his attitude. He really did love his mommy and brothers and sisters. Soon, the tears dried up. He made up his mind to do what was right. He wanted to be kind and get along with others.

Getting up, he wiped his face with his paw and ran to find his mommy. His mommy had gathered all of her pups and warned them that Spot was coming. She told them not to run and to hear what he had to say. She knew in her heart that Spot was a kind pup, and he would change his attitude.

Running into the barn, Spot was surprised to find the whole family gathered. He slowed and walked up to the pack. He cleared his throat and said, “I’m sorry I have been mean to everyone. Mommy, I’m sorry I have disobeyed you and interrupted you. Brothers and sisters, I am so sorry I have not been a nice brother to you. I promise I will change starting now. Please forgive me and give me a chance.”

There was silence and no one moved. Then all of a sudden, he was attacked! They all ran at him and started licking and hugging him. There were tears and laughter. Mommy joined the pack, her pack, of kind loving pups.

Spot turned into a very kind pup. He grew to be the most kind and strongest dog of the pack. Every other dog looked up to him and knew he would protect and love them always.

Girls and Boys, I’m sure your parents want you to be what Spot grew up to be. No, not a dog, silly, but a kind and strong person. Jesus wants you to be kind and to get along well with others. The Bible says, And be kind to one another, tenderhearted, forgiving one another, even as God in Christ forgave you. Ephesians 4:32. It is so cool that all the pups forgave Spot for being mean. Spot had changed his heart. He showed love to others. He stopped doing all the hurtful things he had done. How do you treat others? Are you kind? Do you get along? Are you kind to your parents and other adults? How about your siblings (brothers or sisters)? Do you get along with others even if they are different than you? Remember how all the animals got along. They worked together, even though they were different. Think about these things and make sure you get along with others. I am sure you will do your best and I will be proud of you!

Memorize: Proverbs: 18:24a A man who has friends must himself be friendly.
Verses in NKJ unless otherwise stated.

Email ThisBlogThis!Share to TwitterShare to FacebookShare to Pinterest
Labels: Kindness