We love it when someone is kind to us. Kindness is when someone helps us, says something nice, or gives us something special. When you give your brother the very last piece of chewy, rich chocolate cake, then you are showing kindness. I love chocolate, don’t you? Being kind is sometimes a hard thing to do. You would rather have that last piece of chocolate cake all to yourself. But putting your brother ahead of yourself is being loving and kind. Let me show you a look at kindness in a story.

There once was family of elephants who ran free in Africa. They had a nice clan or group of elephants. They would stay together and move together when they needed more food or water. The larger clan consisted of family groups. These groups consisted mostly of females. Once the males are grown they clump together and remain in the clan.

One day, a little girl elephant was born into one of the families. Oh, she was so cute. She had big ears, big fat legs and feet, and a long, long, long, nose or truck. Oh my, it was long! Momma elephant hardly noticed and didn’t worry about how long it was. However every other elephant that came to visit the cute new baby saw how long it was. They would say things like, “Oh, so cute.” Then the baby would stretch and her trunk would unroll and they would say, “My goodness she has a long trunk.”

It never bothered momma elephant because she loved her baby girl so much. She thought she was perfect. Someone asked her what she was going to name her. So, momma elephant thought and thought. She decided on Lily. Lily grew bigger and bigger every day. Most of the elephants hoped Lily would grow into her trunk size, but her trunk kept growing along with her. This created a problem. For when she walked, she tripped on it! Running was a mistake for she would eventually trip and tumble. If someone wasn’t watching they could end up in the tumble too! 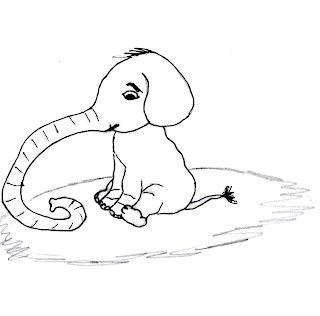 One day she was playing tag with her friends. Well, it happened. At full run, just as she was going to touch a friend, she tripped! She couldn’t catch herself and fell and started rolling toward her friend. Soon they were both tumbling down hill and ended up with a splash in the water. Both started to cry. Lily’s friend cried because she was all wet and scared, Lily cried because she had created the splash.

Then a terrible thing happened. All the other elephants came running to see what happened and slipped into the water too! They were all angry! They decided that the children could not play with Lily anymore. After she was left alone with just her momma, Lily finally got out of the water, crying the whole time. Momma took Lily home. Lily didn’t have anyone to play with so her days were full of watching and hearing the other young elephants play.

Momma had an idea. She took Lily’s trunk and wrapped it around a thick stick then put the stick across Lily’s shoulders. Next she took pretty wild flowers and attached them to the stick. It looked like a cute, short shawl on her shoulders. Momma took Lily to the group of other elephants and showed them what they had made to keep Lily’s trunk out of the way. There were “oohs and aahs. One of the girl elephants said she thought it was pretty and could she have one too? Soon everyone was laughing and hugging Lilly and her momma. They all became great friends.

So every day after her breakfast, bath, and a nice long drink of cool water, Momma would tie Lily’s trunk up. You see Lily couldn’t use her trunk to feed herself or take a drink when her trunk was tied up. Elephants use their trunks as a hose to eat, drink, and take a bath. When Lily’s trunk was tied up she looked so cute and special. She could walk and even run without tripping. Every day she would go find her friends and run and play like all the others.

Days went well until there was a mouse that came visiting. Well, elephants are afraid of small little mice. We don’t know why, since mice are so small next to an elephant! Every time they saw the mouse there was chaos. All the elephants would start to run and bump into trees or each other until a stampede would start. The mouse would just straighten up on its haunches and watch the commotion and laugh. The elephants would finally come to a stop. After the dust would settle, they would stand back and watch the mouse gather food and then run into its burrow in the ground.

This went on for a long time. Until one day when the mouse was carrying back some food to it burrow, it was laughing so hard it wasn’t watching where it was going. It slipped on a leaf and slid down a hill and right in to a snakes den. As you are probably aware, snakes eat mice! This snake was gone sunning itself on a rock and didn’t know dinner had just arrived. It was good for the mouse the snake was gone but it was also bad because the mouse couldn’t get out! “HELP!” It cried, “HELP!” The elephants were too far away to hear and they were not about to help someone who had been terrorizing them if they had.

The elephants soon came back to the place where the mouse had fallen into the hole. Lilly was near and heard a faint “help!” She went over to the hole knowing it was for Mr. Snake so she stayed back a little and listened. Sure enough she heard it again, “help.”

So she looked down but couldn’t see anything. She said, “Mr. Snake are you all right?”

She heard, “It’s not the snake it’s me the mouse.” Lily jumped back! The mouse! She wondered what the mouse was up to.

“What do you want?” asked Lily.

“I have fallen and can’t get out and I know the snake will come and have me for dinner! Please help me get out!” said the mouse.

Lily said, “How do I know you are not tricking me and will scare me and cause us all to run again?”

The mouse replied, “I won’t hurt you. I’ve been mean, and I am sorry I scared you and made you run. Please help me!”

Lily sat there thinking and trying to decide what she should do. Then she remembered when everyone had teased her and made her feel bad. She felt hurt and didn’t want to do that to others. She wanted to be kind to others even if it was uncomfortable. Lily took a step closer, then another, until she was right over the hole. “How shall I help you? I can’t even see you.” she said.

“Put your trunk down the hole and I’ll be able to climb it up out of the hole.” said the mouse.

Lily jumped back as a chill ran down her back. She didn’t want that mouse climbing on her! She was afraid! It made her creep out! What was she to do? Then she said, “I’ll have to go ask Momma to help me untie my trunk.”

“Hurry back!” yelled up the mouse.

Lilly ran over to her momma and explained the problem. After much debate her momma untied her trunk and went with her. They went up to the hole and Momma said to wait, let her try first. Shaking with fright, she slowly lowered her trunk into the hole. All the way until her trunk was as far in as it could go. There was a muffled, “I’m farther down” from the mouse.

Lily’s momma pulled her trunk out and shook it off then said, “It is too deep, we will never be able to get the mouse out.”

Lily said, “Let me try Momma mine is longer than yours.” “Honey, are you sure you want to do this? Remember what the mouse did to us.” said Momma.

Lilly bravely nodded her head and stuck her trunk into the hole. Down and down it went almost to the length of it. Soon it felt something lightly touching it. Yuck! She thought. Trying not to shudder, she loudly said, “Climb up".Slowly the mouse climbed up, slipped a few times, but made it to the top.

It stopped before coming out of the hole and said, “I’m coming out, don’t be afraid, I’ll not run at you. I promise!”

All the elephants that had gathered took a giant step back. Some even walked quickly away looking over their shoulder. Soon the mouse climbed out and then off Lily’s trunk. Lily pulled her long trunk out of the hole.

The mouse said, “Thank you for saving my life. I promise I will never scare you all again! I will move if you would like.”

Lily said, “Momma does the mouse have to move? It is kind of cute and it didn’t hurt me or anything.”

The oldest of the elephants, which we call the matriarch, stepped forward. She had been closely watching the whole thing unfold. She said, “Little mouse have you learned your lesson? Are you going to scare us? Will you let us know when you need to come out of your burrow, so we can go a safe distance away?”

The little mouse said, “Yes, I am sorry. I’ll make some sort of signal when I need to leave my burrow. Will you also tell me when the snake is on the prowl?”

The matriarch said they would do that and the little mouse could stay. Most of the elephants were happy for the little mouse. One of Lily’s friends came up to her and said, “Lily, you were so brave and I think your trunk is the coolest thing!”

Lily and her momma smiled. Lilly didn’t feel she had to tie up her trunk anymore unless she was going for a long walk or running. She felt accepted even though her trunk was long.

Lily learned to be kind to others even if it is uncomfortable. She was kind to the little mouse. She was also shown kindness from her friends. We need to show kindness to others every day. Think of ways you can show kindness to your parents or siblings today. Help your mom clean up the kitchen after supper. Clean up your room without being told to do it. Help your dad clean out the garage. Share your toys with your sister or brother. If it is your job, feed and water your dog without being told. Give that last piece of sweet, rich, chocolate cake to your brother. Think of something else that shows kindness. Ask the new kid in the class to sit next to you. You are a smart child, I’m sure you can think of ways to be kind to others. The Lord Jesus wants us to be kind to others. The Bible says, And be kind to one another, tenderhearted, forgiving one another, even as God in Christ forgave you. Ephesians 4:32.

Memorize as much as you can of Eph. 4:32 And be kind to one another, tenderhearted, forgiving one another, even as God in Christ forgave you.

Email ThisBlogThis!Share to TwitterShare to FacebookShare to Pinterest
Labels: Kindness