What is laziness? Laziness is doing the very minimal amount of work you can do to get by. There are also people who do no work at all, and they are called idle. Let me explain it in a story.

Once there was a family of chipmunks. They were so cute. Each one had light brown fur with skinny black stripes on each side of two white stripes down their backs. They also had a fluffy tail. Their ears were small, but on their little heads they looked big. Their face came to a point at the nose with whiskers so small they blended into their fur. Two parts of their faces were large. One part was their eyes. They had big black eyes with teeny, tiny eyelashes. The other part was their big fat cheeks. Chipmunk's cheeks are so big they are called pouches and were created to hold large amounts of food. Chipmunks stuff them full of nuts, grains, seeds, or berries. Their cheeks act like suitcases to carry their findings home for the winter. This keeps their hands empty so they can run fast. Their hands and feet have very long fingers and long nails, making it easy to grab hold of things.

One time I stuffed a huge bite of pizza in my mouth, trying to hurry so I could go out to play. My Mommy said I had chipmunk cheeks. She made me sit there and finish before I could go out to play. I had to sit there trying to chew with no room in my mouth, and swallowing was hard. It took me longer to eat, than if I had just taken three normal bites. I learned my lesson. Don’t stuff your cheeks full to look like a chipmunk!

If you were able to catch one and hold it, you would feel the flutter of their heart beating very fast, like a tiny drum. Their movements are also fast. They dart here and there looking for food and gathering it all up to take home to store for the winter.

This particular family of chipmunks is made up of a daddy, mommy, and three children: one girl and two boys. They live in a burrow of four rooms. They dug it out of a fallen tree trunk. One room is for sleeping, two other rooms are for food, and one is for empty shells and other garbage. The room they sleep in has grass and leaves to sleep on. Every day the family goes out to gather food for the winter. They find nuts, seeds, and anything else edible that will keep through the winter. They gather them by stuffing them into their mouths until they are completely full. Then, they take them home to their burrow. Once there, they empty their mouths onto the piles of food. They then go out to gather more. Everyone in the family works really hard except for Harold. Harold is the second child and the youngest boy. He has an older brother Kyle and a younger sister Kai. Kyle and Kai are like their parents; they work hard and fast every day. 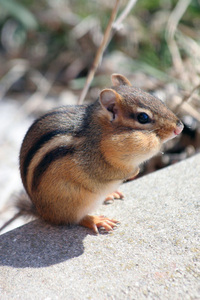 Harold is just the opposite. He works hard at trying to not work. He walks slowly. He only puts two pieces of food into his cheek pouch, only one on each side. Sometimes, he gathers the berries that are juicy because they won’t keep through the winter. This gives him an excuse to sit and eat them right then. Kyle and Kai eat one of those berries for breakfast, one for lunch, and gather other stuff for the winter. Harold slowly munches, sitting there watching the others work hard.

Harold didn’t keep his bed and living areas clean either. He figured he didn’t need to fluff up the leaves because he would just flatten them when he laid down on them next time. Kai and Kyle always fluffed their leaves, and they sometimes gathered new ones to freshen it all up.

Daddy and mommy chipmunk have been watching him, trying to get him to help more and move faster. He will not obey. They tell him if he was older and on his own, he would starve. He would never gather enough food for the winter by himself, working the way he works. He just shrugs his shoulders and keeps moving very slowly.

Daddy thought it would be good for the children to learn how much food they would need for the winter. One day, Daddy and mommy took the three children into the food storage room. They cleared spaces and told Harold that one spot was for his food, one was for Kyle, and one for Kai. Daddy showed them how big an area they each needed to fill before winter came. Harold nodded his head and followed everyone out for a day of gathering food.

Each day Harold would put in three mouths full of seeds or nuts into his space. Each day his sister and brother would carry in ten mouths full, and theirs would have six times as much as Harold. Kyle and Kai’s spaces were getting fuller and fuller. Harold’s spot was hardly full at all. Daddy and mommy would encourage them all to fill their spots. Daddy said the winter would be a long, hard one this year and they needed to store more than normal. Instead of working harder, Harold seemed to slow down.

Soon the weather changed. The wind began to blow hard and the temperature dropped. The berries shriveled up and dropped off. Harold carried in two mouths full of nuts and then stopped because he felt it was too cold outside. The snow had started to fall. They all cuddled up in their beds for a long sleep. The next morning they couldn’t get out of their burrow because the snow had filled up the exit. Daddy had designed air holes so they could breathe. The family slept a lot and played games in their room. One day when it was time to eat, Harold discovered all his food was gone. He had eaten it all! He tried to take some of Kyle’s, but Kyle stopped him. He then tried to take some of Kai’s. She gave him one small nut and said the rest was hers. He ate it really fast and said he was hungry. Kai said he should talk to daddy.

Harold started crying and soon Mommy came to see what was wrong. He told her Kyle and Kai wouldn’t share their food with him. She said they needed to go have a talk with daddy. Harold, daddy, and mommy sat down to talk. They told him he was supposed to have gathered all his food for the winter, and the winter was not even half over. They asked him how he thought he was going to eat. He said he thought this brother and sister should share with him. They told him his brother and sister worked hard for their food, and they didn’t want to share with him because they may run out if they did. Daddy said Harold needed to think about what he did and didn’t do, to prepare for the winter. He told him about hard work and about the glad feeling you feel for completing the task.

Sadly, Harold went to his bed and laid there with his stomach growling. He thought about how he had sat eating berries, watching all the times his sister and brother had gone into the burrow with their cheeks full and then hurrying back out to get more. He remembered his daddy telling him about preparing for the winter. He knew he had been lazy. He knew he should have worked harder, and his cheeks held many more nuts than he had put into them. He knew he could have gathered more food than Kai did. Tears were silently moving down his face. He didn’t know what he would do! Would he just die of starvation? His stomach was growling more and more! Finally he fell asleep, with tears making the leaves under his head wet.

The next morning he awoke, feeling light headed. He guessed that was from not eating. He went over to the exit and tried to get out to search for some food. He could hear the wind howling and was afraid to go out, but he knew he needed to find food. He was almost through digging when his daddy came up and asked him what he was doing. He explained, and daddy told him it was too dangerous to be out. His dark fur would stick out against the white of the snow, and he would be grabbed and eaten by a larger animal or bird. Shaking from fear and hunger, he went back to his bed and tried to sleep. On the second day of having no food, he went to his daddy and mommy and told them he was sorry. He was crying and said he wished he could do it all over and gather enough food for the winter. His daddy and mommy hugged him and told him they forgave him, and they would be willing to share their food with him. They said he couldn’t eat all he wanted, but he would have enough to survive the winter. He was so happy, he could hardly contain his excitement!

Each day, his parents would give him his allotment of food. He would eat some of it and save some, just in case. His daddy smiled to see he had really learned his lesson. Harold even kept his bed nice and neat everyday and fluffed up the leaves.

When spring finally arrived, meaning they could safely go out of the burrow, they all went together to see if food had started to grow. There was mud in spots, but grass was growing. The berries and nuts had not yet grown. They munched on grass. Every day it grew warmer and soon nuts, berries, seeds, and grains were in supply. All they had to do was gather it up for the next winter. Harold stuffed his mouth so full he could hardly hold up his head. Kyle laughed at how funny he looked. Harold was secretly racing his brother and sister to see who was the fastest and who was gathering the most every day. He hadn't known until then how good it felt to work hard and not be lazy. Each evening at bed time he fell into bed so tired but very happy.

Daddy came in late one night and gave each of them a special fruit he had found. He said it was a special treat because everyone had been working so hard. With a wink and a smile, he handed Harold the biggest piece.

Memorize: Proverbs 19:15 Laziness casts one into a deep sleep, And an idle person will suffer hunger.

Email ThisBlogThis!Share to TwitterShare to FacebookShare to Pinterest
Labels: Laziness