You may remember that David’s best friend, Jonathan, died in the same battle King Saul died in. Many years before, David and Jonathan made promises to each other that they would take care of each other’s families.


David asked if there was any person alive from Saul or Jonathan’s family. A man told David that there remained a son of Jonathan named Mephibosheth. That is a very long name. I’m sure his family and nursemaid called him Mephy or something similar for short.


Let me tell you his story.


The land of Israel saw unrest when Saul died. Most of the people wanted David to be king but some wanted one of Saul’s remaining sons. The country was divided. The north took Ish-Bosheth (another long name) and the south took David, each to be king over their territory. This worked for a short time until some fierce men took the life of Ish-Bosheth.


The news traveled fast and came to a woman who was taking care of Mephibosheth. She was afraid that those bad men would be after Mephibosheth.


“Hurry, we must hide far away!” said Mephy’s babysitter.


Mephy shimmied on his stomach and reached under his bed. In his right hand he clutched a horse and wagon, with his other hand he reached for more toys. “I need to take my camel and lion!”


“We don’t have much time! They could be here any moment! Come on!”


His nursemaid grabbed him by the back of his tunic, pulled him to a sitting position, and then picked him up. “Humph, you are growing too fast! I shall still carry you because we mustn’t dawdle.” She picked up the edge of her dress and the bag containing clothes and a loaf of bread.


Mephy was startled because she had never acted like this before. He was angry and frightened and started to cry. “Put me down! I want my toys!” He kicked his legs.


She clinched her teeth and repositioned him. “Stop wiggling. We need to move fast.”


They were up in the nursery overlooking the court yard. The way down was a knotted rope that Mephy used sometimes, which was much more fun, and a circular stairway. She always used the stairs. They had been constructed years before out of flat rocks.

She was normally careful because some stones were a little loose. This time however, she was in a tizzy. She flew down the stairs. All of a sudden she lost hold of her skirt. The skirt whipped around her raised foot and caught it. This caused her to careen down head first. “

“Oh! Aah!” the nurse wailed. Neither one of them could slow the accent. The screams and crash was terrible. At the bottom of the stairs was a tangled mess of arms and legs going every which way.


A few servants heard the commotion and rushed to their aid. The fallen were motionless. the servants gingerly unwrapped them and carried them to an adjoining room. There they laid them on a pallet. The pallet was a bed for one of the servants and had a rough wool blanket.


Soon, the nurse woke. She had a terrible bump on her head and a raging headache. “What happened?”


“You took a tumble down the stairs.”


Mephy’s ankles were in sad shape. “He will need some attention. It’s a good thing he isn’t aware at the moment,” said the big man who carried her in.


The nursemaid sat up and saw at once that Mephy’s ankles were badly broken. “Bring me strips of cloth and some planed wood from the carpenter’s shop. We need to set these right away.”


She made splints for Mephy legs. The big man carried Mephy to a neighboring village to hide from the bad guys. The nurse took good care of Mephy by giving him herbs she ground into a powder. She mixed them with water for him to drink for the pain. There were no doctors or hospitals then. She did the best she could but from then on he was lame. We don’t know if he used crutches or crawled around. Maybe he was carried wherever he went. He may have just had a severe limp.


We aren't sure how Mephibosheth was injured. We only know that his nurse dropped him when fleeing and he became lame in both feet. David brought Mephibosheth to live in his house and cared for him. Mephibosheth ate at David’s table and David gave him land to own. David assigned a special person to look after the land and grow crops for Mephibosheth. 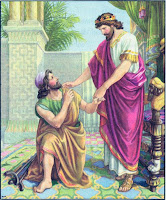 David kept his oath or promise to Jonathan.


Have you made a promise to someone? A promise is something we must keep. If you don’t know if you can keep the promise, don’t make the promise. It would be better to not promise than to break the promise. An oath or vow, are other names for a promise.


Please memorize this verse: Numbers 30:2 If a man makes a vow to the Lord, or swears an oath to bind himself by some agreement, he shall not break his word; he shall do according to all that proceeds out of his mouth.