Most rules for our protection. Some rules we may not understand but we still need to follow them.


David is now king over all Israel. The first order of business is to bring back the Ark of the Covenant or The Ark of the Testimony and sometimes called, the Ark of God. Hundreds of years before, God led the children of Israel out of bondage in Egypt. God’s people traveled for years through the wilderness. The Lord gave them instructions on how His tabernacle should be made. A tabernacle is a temple which is movable. It is made like a huge elaborate tent. The tabernacle had courtyard and a tent with two rooms. One of the rooms, the smallest in the back, was known as the Holy of Hollies. This is where the high priest could go before the presence of the Lord and pray for the people. The tabernacle was a replica of the one in God's presence in heaven. 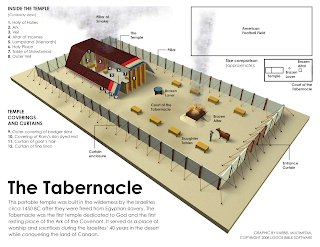 The Holy of Holies had a few pieces of furniture made to the exact instructions of the Lord. The main piece was the Ark of the Covenant. the ark was a large chest. Inside was a plate of manna, Aaron’s rod, and the Ten Commandments. The ark had two angel like beings called Cherubim. Each Cherub faced each other with their wings touching in the center. The ark was made of special wood and overlaid with gold. The Lord gave specific instructions as to how to use and carry it. The ark was not to be treated casually. Only priests could touch it. The ark was made with rings for sticks or rods to slide through and the priests would carry it on their shoulders. In this way, the priests only touched the rods and not the ark itself. 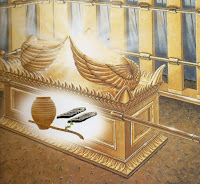 The Lord’s presence in the form of a cloud would rest on the ark. In the holy of holies, in front of the ark, the priest would inquire of the Lord.

No one knows exactly what the Ark of the Covenant looked like because years after the time of king David, it was stolen and never recovered. Here is an idea of what it may look like.

David went before the people and told them he would like to bring the ark to Jerusalem. “Let us bring the ark of our God back to us, for we have not inquired of it since the days of Saul.” (1Chronicles 13:3)


The people agreed. David gathered all the people far and wide, to celebrate bringing the ark to Jerusalem. They got a new cart and placed the ark on the cart.


Then David and all Israel played music before God with all their might, with singing, on tambourines, on cymbals, and with trumpets. (1 Chronicles 13:8) 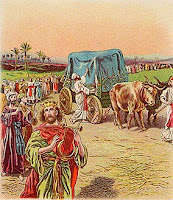 When they came to Chidon’s threshing floor, the road must have become bumpy because the oxen stumbled. One of the men, Uzza, put his hand to steady the ark. This was not how the Lord said the Ark should be treated.


The Lord was angry and He struck down Uzza because he touched the ark. Uzza died before the Lord.


David took the Ark no further to the City of David, Jerusalem. Instead, he took the ark to the home of Obed-Edom. The ark of God remained with the family three months and the Lord blessed the household of Obed-Edom and all that he had. (1 Chronicles 13:14)


At the beginning of this lesson, I said we need to follow rules. Some rules we don’t understand. God had made it very clear how His ark should be treated. David didn’t obey. David’s disobedience cost a man’s life. It was David’s responsibility to ask the priests, who had the scriptures Moses wrote from the Lord, how to treat the ark. In God’s word it was clear His ark was special and needed to be treated with respect. There was a rule. The rule needed to be followed.


Do you have rules in your life? We all need to follow rules. Our parents, teachers, and the government set rules we need to obey. Most rules are for our protection. The only time we can break a rule is if it is against God’s rules. God is our ultimate authority.

Memorize: 1 Chronicles 13:8 Then David and all Israel played music before God with all their might, with singing, on tambourines, on cymbals, and with trumpets.