We have been learning about David. He has killed a giant, sung for the king, hid in caves, cut a kings robe, eaten consecrated bread, and among other things killed a lion and bear. He is an amazing person.

I mentioned a fool—let me start at the beginning.

David and his men are still on the run from Saul. The whole country knows of David, and Saul’s animosity or anger toward him. They know David has fought for and protected them from the Philistines and other groups bent on harm.


David’s men are warriors. His men were called the mighty of the mighty. The men were fierce and unafraid. No one messed with them. They had proven themselves many times by taking on armies much larger than themselves. There were by this time, arround six hundred men. The time in history called for men to take care of other men they encounter from marauders, or bandits that would do them harm by robbing and even killing.
It is sheep shearing time, probably in the spring. A group of shepherds were gathering up the sheep to shear. This meant they were busy at the task at hand and needed protection. David and his men took it upon themselves to protect these shepherds and sheep.


It was the custom of the time that the owners of the sheep and shepherds would pay the protectors after a job well done. David and his men probably did this many times over the years. After the sheep were sheared and the shepherds could now concentrate on watching and taking care of the sheep, David’s job was finished. The owner was known to be wealthy, with many flocks and servants. David sent some of his men to the owner of the sheep, Nabal, and said, “Please give us some bread you can spare.”
He wasn’t asking a huge wage, just some provisions of food. Nabal's response is incredible. “Who is David and the son of Jesse? Why should I give him from my stock of food?”


It’s interesting to note that Nabal knew who David’s father was. He knew perfectly well who David was and what David and his men had done for him and his shepherds. Did I mention, his name, Nabal, means fool?
The men went back to David and told him what Nabal had said. David became angry. “Put on your swords! I have taken care of his shepherds and sheep in vain. He has repaid me evil for good.”


The men did as David said, and they started off toward Nabal.
One of Nabal’s servants heard the exchange between David’s men and Nabal. He hurried to Nabal’s wife, Abigail. The Bible says Abigail was both intelligent and beautiful. Her name means: my father is joy.


The servant told her how David and his men were like a wall of protection around the flock and men during the day and all through the nights. He said,” Be careful what you do. Nabal is a scoundrel.” The Bible refers to Nabal as surly and mean in his dealings.
Abigail hurried and took two hundred loaves of bread, two large skins of wine, one bushel of grain, raisins, and two hundred cakes of figs, and put them on donkeys. She rode one of the donkeys and intercepted David. She jumped off her donkey and fell on her face toward the ground in David’s presence. “Master, please let me take the blame for what my husband said. His name means fool and that is how he acted. You will one day be crowned king and you don’t want this blood on your hands if you kill Nabal. The lord has blessed you and He will continue to do so and as He does please remember me.” 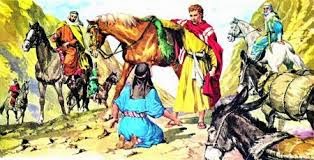 David was struck by the logic and saw the Lord’s hand in the matter. “I thank you Lord and bless You Lord for sending this woman to stop my hand. Thank you Abigail for listening to the Lord’s prompting and talking reason to me.” I think David learned to trust the Lord more through the actions of Abigail.
David took the gifts Abigail brought and he and his men went on their way. The story doesn’t end there. When Abigail got back home, Nabal was in the middle of a party. He acted like his name, fool, and was drunk. She knew this moment was not a good time to tell him what she had done.


The next morning, she told Nabal that David had been on the way to kill him and wipe out all the men of the household. She told him that she gave him food and he accepted the gift and left peaceably. The Bible says, Nabal became like a stone, his heart failed, and ten days later the Lord took his life.
David heard what the Lord did. “Thank you Lord for taking care of my enemy and staying my hand!” David increased his faith and trust in the Lord to deal with his problems. David sent for Abigail and married her.

What can we learn from this adventure of David? David helped others. David was only asking for what was due him. Nabal should have given him food and payment. Nabal acted like his name and acted very foolish and selfish. David should have taken time to talk with the Lord before going after Nabal with murderess intent. He should have trusted the Lord. The Lord is the one to deal with our enemies. We need to give the Lord our problems. We need to trust the Lord to take care of our problems even our enemies.


Memorize: Psalm 41:13 Blessed be the Lord God of Israel from everlasting to everlasting! Amen and Amen.