David is on the run. Out of food and without a weapon, he ends up at a town called Nob. David went to the priest, Ahimelech for shelter and food.


Ahimelech was afraid when he saw David and said, “Why are you alone, and no one is with you?” 1Samuel 21:1
David said to Ahimelech, “The King has ordered me on some business, and said to me, ‘Do not let anyone know anything about the business on which I send you, or what I have commanded you.’ And I have directed my young men to such and such place. Now therefore, what have you on hand? Give me five loaves of bread in my hand, or whatever can be found.” 1Samuel 21:2-3

The priest didn’t have any regular bread on hand. The only bread was holy or consecrated bread. Every day, a freshly baked loaf of bread was presented to the Lord. After it sat there a day and a new loaf was presented, the priest’s families could eat the bread. This bread that was offered to the Lord was called holy bread.


David was not a priest, nor was he clean of sin. He had just told a lie to the priest. Saul hadn’t sent David on a secret mission. David was running away from Saul who was again trying to kill him. David lied to protect himself. He didn’t want the priest to come to harm nor be in the middle of the problem.
David didn’t need to tell a lie, God would have protected and sustained him.


The priest gave David the consecrated bread which had recently been replaced by fresh sweet smelling bread.
This is important: in the building was a servant of Saul, Doeg, who was eavesdropping. He watched and overheard what David and the priest were saying.


David asked Ahimelech, “Is there not here on hand a spear or sword? For I have brought neither my sword nor my weapons with me, because the kings business required haste.” 1Samuel 21:8
Ahimelech said that the only weapon was the sword that belonged to Goliath. Do you remember Goliath? He was that huge giant of a man that David killed years before. His sword must have been impressive. Maybe David should have had the sword all along. He deserved it for killing Goliath in the first place.


“There is none like it; give it to me.” 1Samuel 21:9b
Soon after, again David was fleeing from Saul and he went to Gath. Gath was the where Goliath was from. The people recognized him and said, “Is this David, Do they not sing of him, ‘Saul has slain his thousands, and David his ten thousands’?” 1 Samuel 21:11


Gath was in Philistine country and they were sworn enemies. David heard those words and got frightened. He did something very strange. He acted like he was insane or crazy. He babbled and let his saliva run down his face into his beard. He scratched on the doors. These actions convinced the people he was crazy so they left him alone. David was able to slip safely away.
Saul has been searching and inquiring after David. He sat under a tree feeling sorry for himself. He warned to those around him saying that David will not give them fields and riches so don’t side with him. He accused them of knowing of the allegiance between his son Jonathan and David. See This Story Here


Saul whined. “There is not one of you who are sorry for me.” 1 Samuel 22:8b
Doeg said, “I saw the son of Jesse (David) going to Nob, to Ahimelech the son of Ahitub. And he inquired of the Lord for him, gave him provisions, and gave him the sword of Goliath the Philistine.”


Saul was angry and called for the priest and his whole family. They came and Saul accused them of wrong doing in helping David. The priest reminded Saul that David was well revered, his son-in-law, and one of his mighty warriors.
Saul was incensed or in a rage. “You shall surely die, Ahimelech, you and all your father’s house!”1 Samuel 22:16


He turned to his guards. “Kill them!” The guards did not want to kill a priest, the servant of the Lord.
Saul turned to Doeg, “You turn and kill the priests!” 1 Samuel 22:18


Sadly, Doeg did as he was told. He killed eighty-five men who were in the priest position.

One of them escaped, Abiathar, and fled after David. He told David all that happened.
David said, “I knew that day, when Doeg was there, that he would surely tell Saul. I have caused the death of all the persons of your father’s house. Stay with me; do not fear. For he who seeks my life seeks your life, but with me you shall be safe.”


David took responsibility for his own actions. He placed Abiathar in his protection. Saul’s anger toward David had seeped onto two people. Remember, in the story of David and Jonathan’s friendship, Saul threw a spear at Jonathan because of David. Now we see Saul killing a whole priestly family because of David.
Saul’s anger is rooted in jealousy. Jealousy is evil and gets out of hand.


David wrote Psalm 52 after Doeg killed the priests. In the psalm, David said these words in verse 7: “Here is the man who did not make God his strength, but trusted in the abundance of his riches, and strengthened himself in his wickedness.”
Do you think David was talking about Doeg or Saul? Maybe both?

Memorize: Psalm 52: 9 I will praise You forever, because You have done it; and in the presence of your saints I will wait on Your name, for it is good. 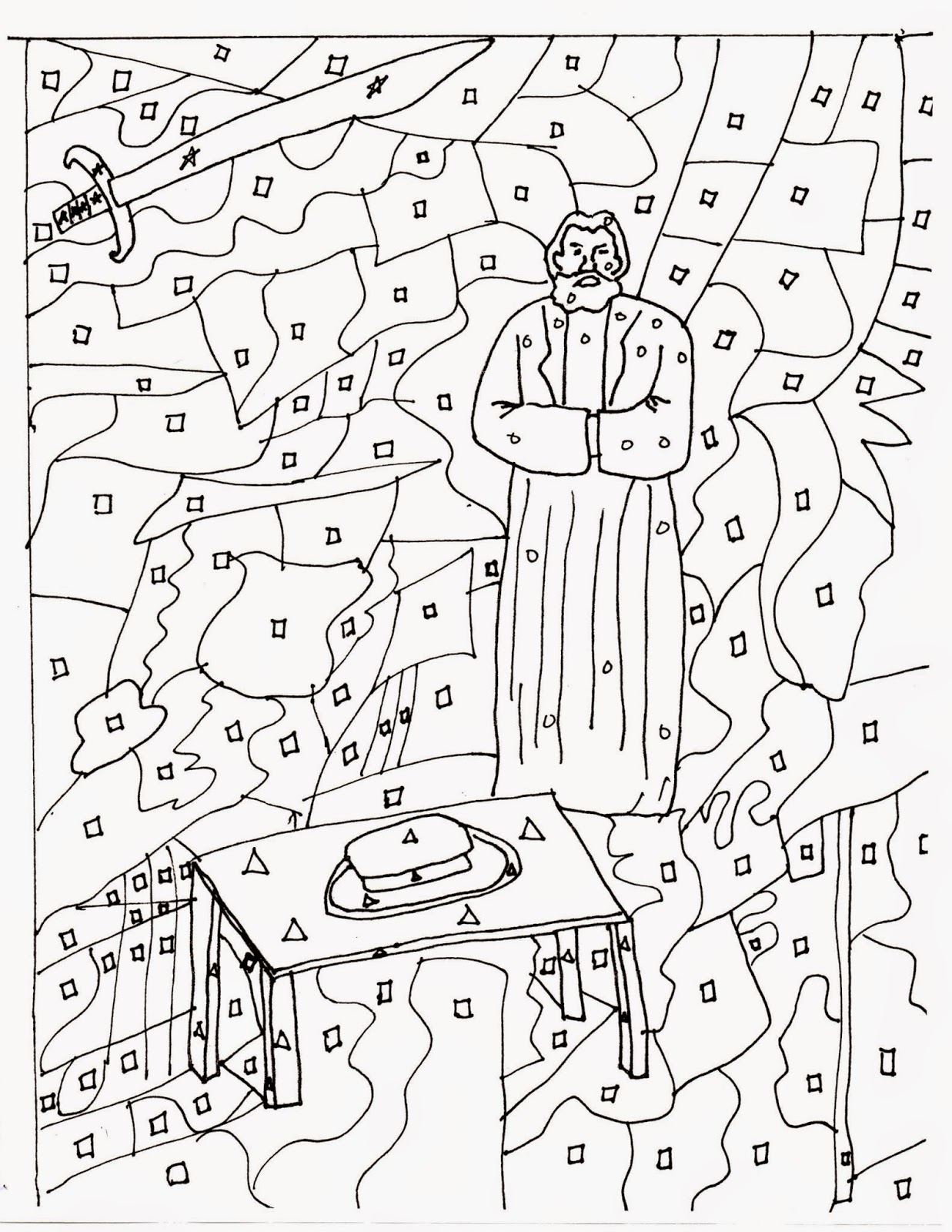 What do you see in the hidden picture?


Verses in NKJV unless otherwise stated
Email ThisBlogThis!Share to TwitterShare to FacebookShare to Pinterest
Labels: The Life of David