I love dogs. Most of them are sweet, smart, strong, and loyal. Some have learned cool tricks. Others are trained to guard. What is your favorite breed of dog? I like big dogs the best. I’ve had many dogs throughout my lifetime. I’ve loved all of them but one was favorite. We named her Chance. She seemed to be a mix breed of German Shepherd, Rottweiler, and Chow. She was smart, obedient, and extremely loyal. She was gentle and kind but protective. For the most part her ears flopped over but sometimes she made them stand up. She had black patches on her tongue because of the Chow in her. This is what she looked like: 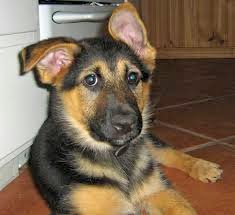 Chance loved to play basketball with my son. She played a determined guard and tried to take the ball away from him. One of her favorite things to do was to chase squirrels. While doing so, she liked to have a partially deflated basketball in her mouth. She'd run around under the trees looking for squirrels and at the same time whipping her neck back and forth trying to “kill” the ball in her mouth.


I trained her to bark on command. I said, “Bark” and that’s what she'd do. She had a loud intimidating bark. Chance knew the rules of the house. She wasn't allowed on the furniture or in the children’s rooms. My garden was also off limits. Sometimes she tried to sneak back into the children’s rooms. We had hardwood floors and tile where she was allowed to roam. Dogs claws in the paws make a clicking sound when they walk on hard surfaces. She figured out that I heard her walk to their rooms. Chance learned to pull up her toes so her claws would not click on the floor. This way she could sneak into their rooms where there was thick carpet to lie on and children to play with.


She knew she would be in trouble when I found her in one of the kid’s rooms, but she stayed  vey still, except for wagging her tail, hoping I didn't notice. Then when I said, “Chance, what are you doing in here?” She jumped up and ran out of the room.


My children played with her and she was very tolerant of them. Once in a while, my youngest daughter put clothes on Chance. She sat patiently while tops and hats became her attire. It was funny to see her try to walk in her the clothes. My children often talked to her and she would listen with her soft brown eyes on them. Sometimes she would sigh for them at the right moments in their story. If any of us were sad, she sensed it and rested her head on our lap. On occasion when I cried, she whined with me and if I didn’t hug her and tell her I was alright, she put her paw on my thigh and dug her claws in to get my attention.


“I’m alright Chance,” was all it took for her to calm down. It bothered her if we became upset.


She was one of the family but understood she belonged to me. My husband had given her to me for a Christmas present. It's the best present I ever received from him. From that day until she died, she tried to be around me whenever possible-- unless of course she was sneaking into one of the kid’s rooms.


Chance wanted to be a lap dog. It wasn't possible because of her size. She was way too big to fit on my lap comfortably but sometimes I let her. When I said, “Hold you,” she climbed up with the help of me pulling her up. We sat that way for a few minutes till I made her get off. One time, we took her camping with us and I held her on my lap in the car for most of the trip. The ride was uncomfortable for both of us.


One day, my youngest daughter and I made plans to go out shopping. Chance of course was right there listening to our conversation.  She always wanted to be part of the action. Something in our voices got her excited and she got a great idea. She wanted to go with us. She acted like one of us, and she slipped beside us out the door. Talking to my daughter and without changing my tone, I said, “Where do you think you are going?”


She stopped almost in mid step with one paw still up in the air. She turned and pushed her belly on the ground and crawled into the house with her ears down and tail between her legs. She knew she shouldn't assume to go with us. She was taught to ask.


Car rides were one of her favorite and when she wanted to go with us, she asked. What I mean is-- she danced around us and whined. If I said, “Okay.” She dashed to the car. Sometimes I teased her by asking her what she wanted. This made her whine more and dance faster. A few times, she barked at me because she was either impatient, or frustrated I didn’t understand what she wanted. Finally, I gave in and said the magic words, “Okay.” Skidding, because she turned and ran at the same time, she flew to the vehicle.


I'm smiling as I write this memory of my dog, Chance. I bet you are too. Do you have a favorite pet? Write a comment below and tell me about it.


What are the lessons we can learn from Chance? It’s good to be gentle, kind, loyal, and patient, like Chance. Most importantly, she was obedient.  Genesis 27: 8 Now therefore, my son, obey my voice according to what I command you. Titus 3:1 Remind them to be subject to rulers and authorities, to obey, to be ready for every good work. Our parents, teachers, grandparents, and anyone in charge of us are our authority. That means we should obey them. Did Chance obey every time? No she didn’t, but I still loved her. I forgave her.


You will mess up in life because we live in a sinful world. God sent His Son to forgive us of our mistakes, our sin. If you have trusted Jesus as your Savior, He has forgiven all your mistakes or sins even the ones you have not yet done. They were nailed to the cross along with Him. He died to pay the price of forgiveness for those sins. To learn more, go to Salvation.

Memorize: Genesis 27: 8 Now therefore, my son, obey my voice according to what I command you.


And/Or John 3:16 For God so loved the world that He gave His only begotten Son, that whoever believes in Him should not perish but have everlasting life.

Email ThisBlogThis!Share to TwitterShare to FacebookShare to Pinterest
Labels: Obedience