Simon is a bear who lives in the mountains of Canada. He has a twin brother named Peter. Simon and Peter look very much alike, but they act very different. Simon’s favorite activity is to lie around in the sun or under the shade of a tree. Peter, on the other hand, hardly takes time to rest. He works alongside his momma foraging for food and learning how to fish. Peter loves to look for and eat fresh berries. Simon also likes the fresh berries, but he doesn't want to take the time or the effort looking for them. He's content to wait for his brother and momma to bring him some.


Peter loves to fish. He likes to stand in the cool water and watch for fish. As soon as he sees a fish, he wants to jump on it. Then he remembers what his momma said, "Be patient and let the fish come to you," so he waits. He waits patiently until one is very close then, quick as a flash, Peter grabs it in his sharp claws.


Peter loves eating fish, and he is nice enough to share his catch with Simon. This is a good thing for Simon because he doesn't want to learn to fish. Simon lies in the sun  watching Peter while waiting for his portion.


Peter is concerned about Simon because Simon doesn’t want to forage for food or learn to fish. Peter loves Simon so he shares his food with him. He is worried that Simon is not interested in anything other than resting and sleeping. 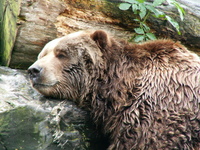 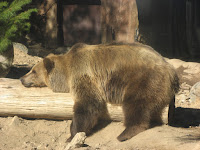 Simon is lazy. He wants everyone else to do the work and bring him food. He doesn’t go far from his favorite log on which he likes to sun himself. When he is not sitting in the sun, he is in the shade under his favorite tree. His day is filled with lying around.  He watches his momma and brother fish and play. When they bring him his food it is the highlight of his day. 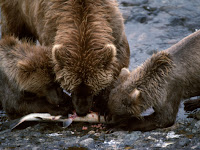 Peter has tried many times to get Simon to play, but Simon is not interested since it would require too much effort. Simon doesn’t know the fun he is missing.


Peter loves to play, splash in the stream, chase small animals, shake the trees to knock the needles and pine cones off, and kick small rocks. He likes to sneak up on bees in their hive so he can have a bite of their honey. He plays as often as he can when he is not getting food. Peter is a busy bear and enjoys life. The smaller animals have learned to play with him and tease him, so he chases them. They know he will not harm them. It is just a game and a way of exercise for them.


Hibernation time is upon them when winter is setting in. It has gotten much colder and has been snowing. Momma told the bear cubs to come with her to the cave for the winter. Simon said he would come later, he didn’t want to move at the moment because he was comfortable.


As soon as Momma was asleep, Peter knew he would soon be too. He was worried about Simon so, he went out to go get him. Peter had trouble with Simon. Simon had already fallen asleep! Peter tried unsuccessfully to wake him. He knew he should not leave him there. He grabbed Simon on the thick fur around his neck with his teeth. He pulled him to the cave which they made into their den. It was a slow and painful task for Peter. His body was smaller than Simon’s and ready for hibernation. He struggled, tugging and pulling until he finally got Simon to the cave. Out of breath and full of exhaustion, Peter collapsed right next to Simon.


Spring came to the mountains early that year. Simon opened his sleepy eyes to see his smiling momma. He realized he was in the den, but didn’t know how he had gotten there. Peter had not awaken yet. Simon’s stomach started growling so he prodded Peter to wake up. Finally Peter awoke and told them how he had struggled to get Simon to the cave. His momma told him she was proud of him, and Simon told him thank you.


Peter tried to get up and realized he had hurt his leg. He could not stand on it! He must have injured it while dragging Simon to the cave. Momma looked at it and saw a place where he had hit it and there was dried blood on it. It was almost healed but not quite all the way. She licked off the blood and told him he could not go out yet.


Mama told Simon they needed to get some food for all of them. Simon didn’t know what to do. He had never foraged or fished for food before. Also, he had never walked far before. He had a choice to make. He could get up and help or stay there and expect his momma to do all the work.


Simon chose to do the right thing. He got up and helped his momma get food. Bears wake up from hibernation very hungry. It took a lot of food to get all three bears full. They worked all day.


Each day they both brought food for Peter until he was finally mended. From that time on he walked with a slight limp.  He had broken a bone and it healed wrong. His limp was a reminder to them. They had learned the value of working and not being lazy. Peter knew that if Simon had not been lazy he would not have gotten hurt. Simon learned that if he had not been lazy he would have walked to the den on his own and Peter would not have gotten hurt. Simon knew he was the reason Peter walked with a limp.


From then on, Simon worked as hard as Peter. He also learned to play, and you know what? He was enjoying life much more. Peter took time out to lie in the sun with Simon. They didn’t do it too often, but when they did it was fun. They talked and made pictures out of the clouds in the sky. They learned to cherish those times because they didn’t do it too often because there was work to do.

The Lord doesn’t want us to be lazy. Proverbs 10:4-5 He who has a slack hand becomes poor, but the hand of the diligent makes rich. He who gathers in the summer is a wise son; he who sleeps in the harvest is a son who causes shame. Proverbs 19:15 Laziness casts one into a deep sleep, and an idle person will suffer hunger.  We should do our fair share of work. Simon is a good example of what not to do and Peter is a good example of what to do. Peter loved Simon. The Bible says, John 15:12 This My commandment, that you love one another as I have loved you.


Memorize either or both: Proverbs 10:4-5 He who has a slack hand becomes poor, but the hand of the diligent makes rich. He who gathers in the summer is a wise son; he who sleeps in the harvest is a son who causes shame. Proverbs 19:15 Laziness casts one into a deep sleep, and an idle person will suffer hunger.


Email ThisBlogThis!Share to TwitterShare to FacebookShare to Pinterest
Labels: Laziness