Do you know what a Rainbow bird looks like? Well, a rainbow has seven colors. Can you list them? That’s right, red, orange, yellow, green, blue, indigo, and violet. Here is a picture of a Rainbow bird. How many colors do you see? 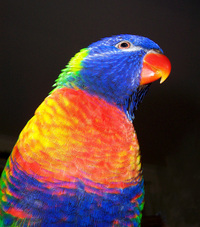 Rainbow birds, or Rainbow Lorikeet, are a species of parrot. They are found in Australia, eastern Indonesia, Papua New Guinea, New Caledonia, Solomon Islands and Vanuatu. They have been introduced to other countries like New Zealand and even China.

Akala is a Rainbow bird, and her name means parrot. Akala is pronounced Ay-Kay-Lah She lives in Australia with her family. She has two best friends Marinna, pronounced Muh-Rin-Nuh, which means song and Bega, pronounced Baig-uh, meaning beautiful.

Akala used to get so frustrated because of her friends. Even though she loved them, she was jealous of them. She compared herself with them and thought she was lacking in beauty, prettiness of voice, athletic ability, and neatness.

Akala tried so hard to keep her feathers neat, for them to lie down and not stand up in disarray. When she looked at Bega, every one of Bega’s feathers were in place. She was beautiful just like her name. Akala wished she were beautiful. She thought Bega’s breast feathers were prettier because she had more red in them. Akala’s feathers on her breast were more yellow. Bega’s nest was also neater and straighter. Bega built her nest symmetrically, which means orderly and organized. Akala tried to fix her nest, but it still looked half hazard, irregular, or thrown together. 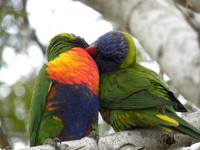 Akala’s husband was Dainan, pronounced Day-nan and meaning kind hearted. He didn't seem to mind. He told her often that it was fine. Nevertheless, she kept trying to fix it and make it look as neat as Bega’s nest. Akala also compared herself to Marinna who was known all over the area for her lovely singing voice. Many other Rainbow birds say she should have been born a Song bird because she sings so pretty. When Akala would sing, only Dainan stayed to listen. All the other birds flew away. She noticed this and stopped singing.

There was another special skill Marinna had, and that was to hang upside down. She could land on a branch, hold on, and let herself fall forward until she was hanging upside down. Akala tried it and fell off! It was a good thing she was high above the ground so she could swoop back up into the air and not crash.

Marinna made it look like an easy thing, to hang upside down. Akala’s feet were not as strong as Marinna’s. Akala needed to stand upright on the branch. This made her feel less athletic.

Akala was fixing her nest one morning, before meeting her friends for breakfast, and was muttering to herself. Dainan stopped her and asked her what was wrong. She sat down with a huff and said, “I can’t do it! I can’t make our nest look nice and neat like Bega’s!

Dainan replied, “Why would you want to? I don’t want our nest to look like a museum. I like the lived in feeling of our nest, its cozy.”

Akala just stared at him and then slowly looked around. She said, “Really? You don’t mind that I don’t have a perfect nest?”

Dainan put his wing around her and said, “I like our nest and I think you made it perfect. Oh, by the way, why don’t you sing anymore?”

Akala replied, “Well, I don’t sing well, and the birds all fly away.”

Dainan said, “Won’t you sing for me? I love to hear you sing.”

Akala replied, “But I can’t sing nearly as pretty as Marinna does.”

Dainan said, “I much prefer to hear you sing, my dear.”

Smiling she said, “Thank you.” Then, “I better hurry, I want to go bathe in the pond before I meet Marinna and Bega for breakfast.”

Dainan said, “Wait. I’ll go with you.” At the pond, Akala kept fussing with her feathers, pushing, tugging, shaking, and pecking at them. Dainan finally asked, “Akala, what are you doing?”

Akala replied, “I’m trying to get my feathers to lie down and behave themselves. Bega always looks so beautiful, not a feather out of place. Try as I might, I always look, well, disheveled.” (Disheveled means: messy, sloppy, mussed, rumpled, and untidy)

Dainan said, “Akala, stop and look at me.” She did, so he said, “You are beautiful to me. I love the way your feathers are sort of muffed up all the time. It gives you special character. It was what drew me to you in the first place.”

If birds could blush, that’s what you would have seen on Akala’s face. She coyly tucked her head. Dainan took her to the edge of the pond and showed Akala her reflection. Then he said, “Akala, you are beautiful inside and out, and I don’t want you to change. Quit trying to be something you are not, and stick to being you.”

Akala was always comparing herself to her friends. When you and I look at those pictures we see two almost identical birds. We don’t see the difference. If we saw their nests, we would see two nests and not see the difference. We also wouldn’t notice that one bird sang better than another or that one could hang upside down. Sometimes we may feel inferior or not as pretty, bright, or athletic as someone else. That is just how we feel. Other people looking at us don’t see that or feel that way about us. They just see a person made by God. We should not measure our worth next to someone else. We should measure our worth on how God looks at us and how He feels about us. God was pleased when He made you. God loves you for how you are. Don’t worry if you are shorter, taller, have dark hair, light hair, are athletic or not, musically inclined or not, or any other difference. Just remember that God made you special and He loves you just the way you are. The Bible says God made us in Isaiah 43:7b Whom I have created for my glory; I have formed him, yes, I have made him. Genesis 1:27 So God created man in His own image; in the image of God He created him; male and female He created them. Verse 31a says, Then God saw everything that he had made and indeed it was very good. God says what he made was good. That is you!

Memorize: Psalm 139:14a I will praise you for I am fearfully and wonderfully made;

I have been introducing names for the animals from different places in the world. My name is Robin, an English name, and it means bright flame. What is your name? Do you know what it means? If you have permission to tell me, please put it in the comment box on the bottom. You will have to click on one of the pull downs, like Google, so it will post. Thanks, I would love to hear from you.


Email ThisBlogThis!Share to TwitterShare to FacebookShare to Pinterest
Labels: Jealousy