“Ha Ha Ha!” laughed Sally. “Look at those big teeth he has! They are enormous!”


Boys and girls, was that a nice thing to say? Sally said a mean and cruel thing. It hurt Zack’s feelings. He heard her say that. He had heard many others say things about his teeth. When Zack’s teeth grew in, they became larger than normal. Zack is supposed to have large teeth because he is a beaver, but his teeth are twice the size of the adults around him and he is still a yearling. At first, he was proud of his teeth because they were strong and useful. He could chomp on wood as well as his daddy could. His parents and siblings never made fun of them, so he didn’t think much of the fact that they were so large. In fact, his parents told him how wonderful and useful his teeth were. He was proud of them.


Then one day he was attending a championship chomping competition that his daddy was participating in, and that is when it happened. One of the yearling beavers commented on his teeth. Then another started laughing. Soon, many took up the chant about his teeth. Zack ran and hid behind his mommy, and because he was hiding, he almost missed his daddy’s turn. He poked his head out just in time to see his daddy win the race!  From that day on, he heard all the jokes and all the ridicule about how big his teeth were. He tried not to let it bother him, but sometimes, like when he heard Sally, it hurt. Even though he could chomp a tree in less time than other beavers his size, they teased him more. This was probably because they were jealous.


Beavers cut down trees by chomping and chewing them with their teeth. They use the trees and branches to build dams in the streams and rivers, making a pond.  After they build the dam, they build up an area then build a home called a lodge. So, the entrance to their lodge is underwater, and the roof of the lodge mostly floats on the water.  When it gets cold and the first frost comes, they put mud on the outside of the lodge forming a barrier that freezes. The frozen mud is so hard it is like stone, and predators cannot break through. Water also doesn’t break through, so they can live in there comfortably. They work at repairing and building all the time. They do not hibernate.  They store their food from trees in a pile beside the lodge, and when the snow falls on it, the snow protects the water from freezing so they can eat it easily. They swim up to it and eat the underneath submerged part of the pile.

Beavers live together in family units, working hard together in corporation. When the yearling grows old enough, they will add on to the lodge or go a distance away and make their own lodge. The size and proximity to one another depends on how thick the trees and vegetation is. Beavers eat plants, which mean they are herbivores. They especially like the tender stems of lilies, which are flowers that grow in ponds where the head of the flower floats on the surface. 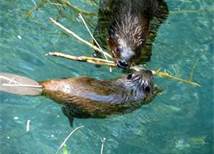 The fur of the beavers comes in a variety of brown colors with some shades of black or even red. They have claws for their front paws, but the back ones are webbed so they can swim well. They have small eyes and ears, whiskers, and the ever present large front teeth. Those teeth are two on the top and two even larger ones on the bottom. Their teeth continue to grow all through their lives because they get filed down on the trees they are chomping, so they need to grow back. Beaver tails are unique, long and flat. They use their tails to splash water and pack the mud on their lodges. Beavers live to be about 25 years old and can grow to around 55 lbs. One species lives in North America and another in Eurasia (Europe and Asia). 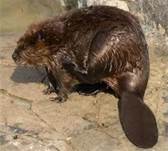 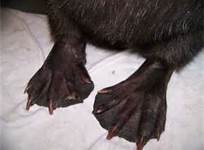 Zack doesn’t travel far from home for fear he will run into the other beavers or other animals that will tease him and make fun of him. He works close to home helping his parents keep the lodge and dam repaired. One day, he discovered something besides chomping he could do with his teeth. He found out he could blow air through them creating a whistling noise. He learned to whistle through his teeth! He figured out he could whistle quietly to himself or very loudly. When some of his pals learned he could do that, they thought it was pretty cool. The other yearlings tried to imitate, or copy, Zack but they could only get a little air sound and not a true whistle. Zack practiced his new skill every day, and he didn’t feel so self-conscious about his large teeth. He was still teased or stared at by other animals, but he didn’t mind as much. He knew his big teeth were special, and he could make cool noises with them.


Beavers warn their fellow beavers of danger by slapping their tails on the water as they dive down. This causes a noise above and below the water. If there is a predator, a beaver will dive away from the predator slapping the water with its tail to warn the others. Other beavers will hear it and hide in their lodges. Beavers are very good swimmers and can stay underwater for up to 15 minutes. Other animals cannot stay underwater as long, and it is difficult to find the entrance to the lodges so the beavers are well protected.


One night, it started to rain, and it rained all through the next day and into the night. The rain was causing flooding and the water levels were going up. Daddy beaver went up river to see how bad it was.  Zack and his family waited anxiously for his return. When he finally poked his head into the lodge out of breath he asked, “Didn’t you hear me splash the water in a warning?” They shook their heads and he continued, “I didn’t think so, because the rain is so sever and loud. We need to warn the beavers that the flooding is knocking out all the dams and lodges.” Then Daddy turned to Zack and said, “Zack, it is up to you.”


Zack didn’t know what he was talking about, so Daddy explained. Zack needed to go out into the rain and whistle as loud as he could to warn all the beavers. Nodding, Zack dove under the lodge and out into the pond. The rain was coming down in torrents, and he wasn’t sure he could whistle loud enough. His daddy was right beside him and said, “Go ahead son.”


Zack took a very deep breath and blew as hard as he could! “Whoooooooooooo!”They waited and watched. Soon, they could barely make out beavers coming out of their lodges down river. Once the beavers understood the danger, they all ran up away from the river. Beavers run slowly, so it took a while, but they made it to safety. They waited out the storm and returned to find their lodges and dams were torn apart. Work was needed immediately to put everything back to what it had been.

After days of working, many of the beavers came and told Zack they were glad he had such great teeth that could whistle so well. Some said he could warn the whole river! Zack was pleased he had helped. Daddy said it was time for him to build his own lodge, and he would help him. Zack was confident in his ability to cut wood and whistle!


Children, do you know someone who is different than you? God made us all different because He likes variety. Some of us have red, brown, black, or blond hair. Eye color varies from dark brown to the lightest blue, and skin can be shades of pale to a deep dark color. Some of us are tall or short, male or female. Some of us run very fast while others need to use a cane or a wheel chair. Some of us have more fingers while others are missing an arm. There are people more intelligent than others. There are some that are hardly ever sick and others who have diseases. We are all different, but we are special in the eyes of the Lord. God made us special and gave us special abilities. Be happy with the way God made you. If you see someone different than you, please respect them. They are made by God, and He gave them a special ability or disability that makes them special. We are all perfect the way God made us.