A long time ago, in a little cabin, in a small village there lived a nice family. There were three of them: Papa, Mama, and their five-year-old son, Jonah. They didn’t have much, for it was a poor village. Papa had worked hard at the mill cutting trees down into lumber. The mill had to cut back to part-time work because the trees were getting scarce. The men who were loggers were traveling farther and farther away to find the trees to cut down. They would load them onto carts and horses pulled them back into the village to the mill. The area had been logged for generations and the trees that were left were too small to cut. In a few more generations, the trees would grow and become plentiful, but at that time, they were scarce.
Almost Christmas time and Jonah wanted a real Christmas tree. He had seen pictures of Christmas trees and knew what they looked like. Unfortunately, there weren't any trees to be found to cut down for a Christmas tree.
He loved to hear about past Christmases and celebrate. Christmas time was a special time for the family.

Jonah's papa had carved a nativity set for the family. It stood beside the family Bible on the table by the window. Papa sat in his chair by the table every evening and read the Bible to his family. Jonah loved to touch and handle the nativity pieces, moving them around.
Over the years, Papa had added to the set, and now there were: Mary, Joseph, baby Jesus, angel, shepherd, cow, and sheep. Mama put one of her earrings, which had been her grandmother’s, at the top of the stable and the light from the fireplace made it sparkle just like a star.
This year, Papa again used pieces of wood left over from the mill and worked on carving the three wise men. He said he would try to make a camel too. Jonah watched Papa as he carved and wondered what they would look like when they were finished. Papa thought he might get the four pieces finished this year. He had more time because of scarce work.

Most days during the Christmas season, Jonah asked his Mama to tell him the Christmas story and he moved the pieces around according to the story. As she made bread, she recounted the story. Jonah had heard it so many times he could almost say it with her. When the part came where the angels appeared to the shepherds, Jonah took his other toys and make them more sheep, shepherds and angels.
When the bread was in the oven, Jonah took down his favorite picture book that had pictures of Christmases around the world. He loved looking at the stockings hung on the mantels of the fireplaces, trains on tracks around the trees, and the beautiful trees.

Often during the days leading up to Christmas, Jonah asked if they could have a pretty tree like in the pictures. He remembered two years ago when they had a tree. He thought about the fun they had when they decorated it. He knew Mama had a wood box which held pretty things to put on the tree. Ornaments are what Mama called them. He had difficulty saying ornaments, it came out "orments." He wasn't allowed to play with them, but Mama occasionally opened the box so he could look at them.

One day he played outside.  He plopped on the ground to look up at the clouds. He liked to make pictures out of the clouds. He caught sight of a falcon in the sky. He lay there watching the falcon soar through the sky. It flew up and up--up to the top of one of the rocky high mountains. His eyes watched the falcon. He saw it--the most beautiful tree he had ever seen. It was a deep green and shaped like a Christmas tree! He had never noticed it before. He got up and ran to the cabin. “Mama come look!”

Mama ran to see what could be wrong. When she came out the door, Jonah pointed to the top of the mountain. “It’s my Christmas tree!”

“Look up there. It’s a Christmas tree and Papa can get it for me, and we can decorate it and…”

“Jonah, that tree is impossible to reach! Look at that mountain, no one could climb it, let alone bring back a tree!”

That evening when Papa came home, Jonah told him about the tree. Jonah said the tree would make Christmas perfect. Papa shook his head. "Jonah it is practically impossible to get to the tree and cut it down. Men had tried before and realized it was not worth the risk. One man fell, injuring himself badly, and now he has to use a cane to walk."

Papa rubbed the top of Jonah's head. "Christmas will still be a wonderful day even without a tree."

Sadness drooped Jonah's shoulders as he climbed into his bed that night. With the tree on his mind, he fell asleep thinking about beautiful Christmas trees.

Papa couldn’t sleep. He kept thinking about how excited Jonah had talked about the tree. He just wondered if…He got out of bed and got dressed. He quietly left his cabin and walked to his friend Jake’s cabin. Jake was asleep but finally answered his knock. Opening the door he exclaimed, “Charles, what are you doing here? Is something wrong?”

Charles said, “Jake I need your help. I’m hoping you will help me, but it will be dangerous.”

Jake said, “Molly is asleep, I’ll get my coat.”

Charles laid out his plan and Jake agreed to help. They decided to meet in an hour after they had gathered all they would need for the job.
At the appointed time, they net and surveyed the things they had gathered. Ropes, picks, a saw, burlap sack, and a sled. They were dressed in warm gear, gloves, and climbing boots. Before they started, Charles prayed for safety. They knew this was a very dangerous job, but they felt they had a good plan.

The first part of the climb was not too bad. It was a good thing, because it was still dark. At least a full moon illuminated the mountain. As the sun began to rise, they saw the path had gotten quite narrow and slippery. Only mountain goats climbed this far. It became a long and difficult ascent. Ascent is the act of going go up, or to climb.

After hours of climbing, they reached the tree. The tree stood straight and beautiful--an amazing feat to be there. The tree looked like it grew out of the rocks of the mountain. It was very dangerous and tricky to cut the tree out. After they secured themselves with ropes attached to spikes hammered into rock, they did the same to the tree. The ropes would keep the tree in place when it was cut from its roots.

Carefully Charles sawed the tree. It was a long and tedious job. Tedious means burdensome and tiring. Charles stood perpendicular on the side of a cliff which made him parallel to the ground. Finally, the saw cut through. The tree slumped slightly. Charles went back up to where Jake was, and the two of them pulled the tree up to their level. They wrapped it in burlap and tied it with ropes to the sled.

Cautiously, they started the decent. At the first, they had to propel themselves and the sled with ropes. Farther down they could walk. It was more treacherous, which means unstable and insecure footing, going back down.
The sled slipped and fell off the side of the mountain! Charles and Jake were tied to it. They were almost pulled down too. Thankfully, they were able to catch themselves. They pulled the sled back up. They were tied together. If only one had been attached, it would have taken him with it down into the depths below.

At midafternoon, they finally made it all the way to Charles’ home. Charles and Jake’s families were waiting and greeted them with hugs. Relief filled them that they were safe. When they took the burlap off the tree, everyone was amazed at how beautiful and perfect it was. An excited Jonah could picture it all decorated. They brought the tree into the cabin and set it up in front of the window.

Charles embraced Jake. "Jake thank you, I couldn't have done it without your help, you are a true friend."

Jake wanted a nap, so he and his family went home.

A joyful Jonah helped put the ornaments on the tree. They popped popcorn and strung it with thread and hung it on the tree. The tree sparkled with beauty. They sat and sang Christmas carols and ate cookies Mama had made.

The next morning, Jonah woke up very early because he wanted to talk to his papa and mama about what he wanted to do. His excitement woke him up!

Jonah said, “Papa, thank you for the tree. It is so beautiful, but I don’t think I should keep it all to myself. I want the whole village to enjoy it. Can we set it up in the middle of the village?”

Papa looked at Mama then said, “Jonah that is a very kind thing to do. The people would be happy to have such a beautiful tree to enjoy. I heard people were sharing decorations to help decorate the village square. They are planning a Christmas gathering and decorating event. The tree would be a wonderful center for all the festivities.”

Mama added, “Jonah, are you sure? You won't have what you wished and dreamed about--a tree right here to look at and touch for Christmas.”

Jonah said, “Yes, I'm sure. This way, everyone will get to enjoy it.”

Papa grabbed Jonah and tossed him into the air. He caught him and hugged him tight. Jonah giggled and Papa said, “I am so proud of my boy!”

The three of them carefully undecorated the tree. They carried it it to the village square where everyone gathered to decorate and have a Christmas celebration. The people loved the tree and were so grateful they could enjoy such a marvelous gift of the tree. All decorated, the beautiful tree stood tall as if smiling.
One of the men asked Charles to read the Christmas story from Luke chapter 2. Everyone gathered around and listened to Charles as he read in his deep voice about Jesus’ birth. Then they all sang Christmas carols. 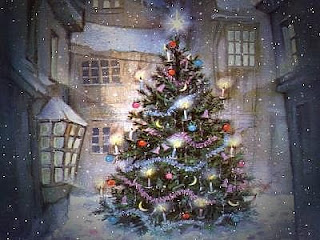 One of the men told Charles that it was the best Christmas the village had ever had.

Charles told how he and Jake had gotten the tree. "It was Jonah's idea to give the tree to the town for everyone to enjoy."

The people patted Jonah on the back, rubbed his head, or hugged him and told him thank you.

That night, Jonah sat and looked at where the tree had stood in front of the window and knew he had done the right thing. He remembered everyone’s smiles, hugs, and laughter. He was glad he had given the tree to the village for all to enjoy. It felt like he had gotten a gift instead of giving one. He knew he would remember this special Christmas the rest of his life. And he did.


I hope all of you have a wonderful Christmas full of smiles, hugs, and laughter. Remember Christmas is for giving. Think of something special you can do, make, or give to someone. Giving is what Christmas is about and it all started the day God gave His son to be born for us. Happy Birthday, Jesus!

Take time and read or have someone read to you the true story of Christmas in Luke chapter 2. Merry Christmas!