Charles was a big strong boy. At ten years old, he was taller than his classmates. He was taller than any kid in his whole school. His voice was louder and deeper sounding than most boys. He sounded like a grown up. Charles, being bigger and stronger, could have bullied people around. He could have made people afraid of him. Charles wasn’t like that, though. He was gentle, kind, and considerate to others.

He said, “Yes, ma’am" and "Yes, sir" to adults. He played fair and nicely with other children. Smaller kids were not afraid of him. They liked him because he was nice to everybody. He helped the younger and smaller children. In the grocery store, he would reach things too high for the moms and grandmas.

Charles had a great way with animals. He lived on a farm a few miles from town. On the farm were chickens, a cow, a horse, and a pig. Also there were cats and dogs. The cats caught mice, and the dogs kept strangers away. The cats and dogs were also fun to play with. One special dog, Mike, followed Charles around everywhere he went.

Everyday Charles had chores to do, which included feeding and watering the animals. Gathering eggs and mucking, or cleaning out, the horse stall was also part of his chores.

Charles woke up very early in the morning to feed the animals and gather the eggs. Every day after school, he needed to make sure there was mud for the pig and that the horse stall was mucked out with new hay put down on the dirt floor.

The animals loved him because he was gentle with them. He spoke softly to them. The horse, Raven, nodded his head when Charles came up to the stall. Raven would step back to let Charles in. Raven softly whinnied until Charles hugged him and rubbed the long bridge of his nose. Sometimes Charles came in after school with an apple or carrot. On special days, he gave Raven a lump, or cube, of sugar. Raven enjoyed theses treats.

The pig, Frank, loved him because Charles always talked nicely to him as he sprayed him with water from the hose. Charles was always careful to spray lightly with not too much pressure. Frank love the mud Charles made for him to wallow in. It felt cool and gooey. Charles would pick up a bucket of food, which consisted of the family's leftovers, and pour it in the food trough. It looked nasty and smelled yucky, but Frank, being a pig, loved it and would oink his pleasure.

One day, one of the chickens was walking funny. I think chickens walk funny all the time with their head bobbing with each step. Have you ever tried to walk like a chicken? Try it sometime with your arms tucked under with your hands in your armpits. Lift your legs high and straight and don’t forget to bob your head! Ha, I bet you look silly! 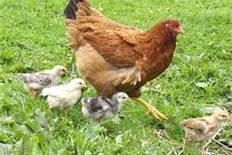 This particular chicken, Buffy, walked with a slight limp. Charles was a giant next to the little chicken. Because Charles was gentle, the chicken trusted him and was not afraid. Buffy was a girl, or hen. Her job was to lay eggs. When Charles got near Buffy, she sat down and let him pick her up. He carried her into the barn to a work bench. He set her down gently and carefully felt her leg. It had a scratch near the claws where there are no feathers. Charles gently wrapped a strip of cloth around it and attached it securely without hurting her.

Charles’ papa was watching the whole thing from up in the hay loft. Papa came down as Charles picked up Buffy. Papa said, “Charles that was a kind and gentle thing you just did. I’ve never seen a hen sit still for something like that. Normally there are feathers flying all over, and it takes two people. You are gentle, and the hen trusts you. I’ve noticed all the animals love you and obey you better than they do me, because you are so gentle. I’m proud of you.”

Charles smiled and stood a little taller, if that was possible. He took Buffy back to the coop and laid her on her nest.

Charles is a good example of someone being gentle. You and I need to be gentle with others, not just animals. The Lord Jesus wants us to be gentle. The Bible lists ways we need to be toward others. We see this list in Galatians 6:22-23. One of those things listed is gentleness.

We especially need to be gentle to those smaller and weaker than us. Do you have a younger brother or sister? The Lord wants us to be gentle to them. If you are picking them up or helping them with something, remember you are bigger and stronger and need to be careful and gentle. There might be a grandparent or someone older in your life that you need to be gentle with. You can help them by carrying things for them, opening doors for them, and treating them with gentleness. Do you have a pet in your home? Remember to be gentle with them, and they will love you more and trust you better. Think about what Jesus wants you to do, and act that way with others.

Memorize: Philippians 4:5a Let your gentleness be known to all men.

Email ThisBlogThis!Share to TwitterShare to FacebookShare to Pinterest
Labels: Gentleness